Proof...what does it mean? How does it taste? 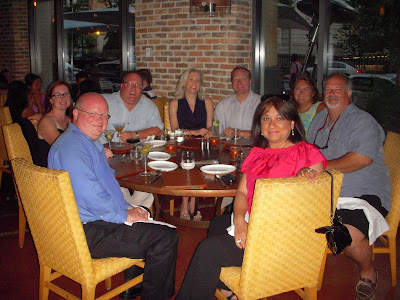 In the 18th century and until 1 January 1980, Britain defined alcohol content in terms of “proof spirit,” which was defined as the most dilute spirit that would sustain combustion of gunpowder. The term originated in the 18th century, when payments to British sailors included rations of rum. To ensure that the rum had not been watered down, it was “proofed” by dousing gunpowder in it, then testing to see if the gunpowder would ignite. If it did not, then the rum contained too much water and was considered to be “under proof.” It was found that gunpowder would not burn in rum that contained less than 57.15% ABV. Therefore, rum that contained this percentage of alcohol was defined to have "100 degrees proof."

That was plagarized directly from Wiki.
Is it plagarism if you write that it was from Wiki?
Anyhow, it was another birthday dinner for me. I think this was number 4 or 5! Any excuse for a good meal with great friends. Sindhu and Eric, Andrew and Allison, Chris and Lauren...
We originally had reservations for Table 24 at Vidalia, but RJ Cooper left that restaurant, leaving me flummoxed. I decided to try Proof as I recently did some business with Estadio, also owned by the same folks. We would have hit Estadio, but I like to let restaurants settle in before I have an event like this. 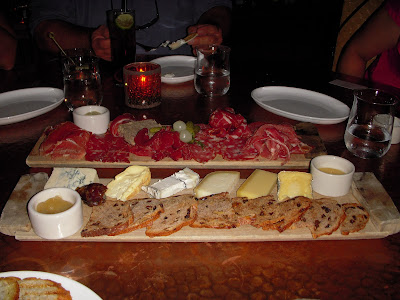 We started at Andrew and Allison's place in CP with a bottle of Kluge Rose bubbly and a torchon of Foie I picked up at Hudson Valley Fois Gras farm. At Proof we dug into a charcuterie and cheese board. The cocktails we started off with were inventive and refreshing. Perfect for a ridiculously hot day. After that we went for the chef's 4 course menu with the wine pairings. 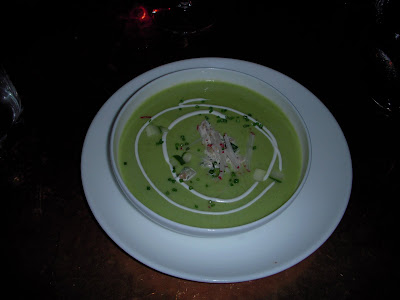 The starter was an avocado and cucumber soup with shrimp relish. This was served cold, but had some chili heat to it in the finish. It was served with Cerreto from Arneis in Italy. The wine had a slight effervessence and a lot of citrus. Nice pair...but it gets better! 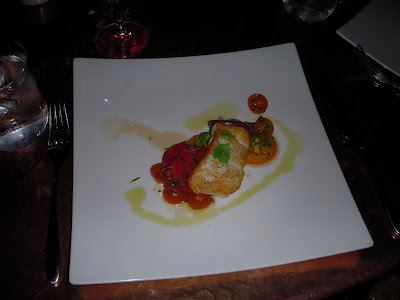 This was the Alaskan Halibut. Perfect crust on the top, flaky and moist in the middle. It was served with a B. Diochon Gamay from Burgundy. The fish was the star of this course, though the wine was a nice companion to it. Light. 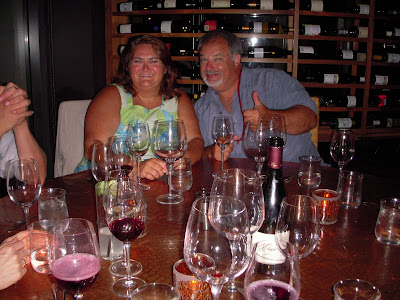 Looks like we had a few glasses here....speaking of glasses, the only complaint my crew could come up with was that we were served all of the wine in the smaller glasses you see here. It wasn't until we tasted the Elyse and ordered the bottle that we were provided the red wine balloons. They were what was probably missing from the Gamay. When you've got a crew as particular as my posse having the complaints limited to the glassware is a pretty strong endorsement of a restaurant. 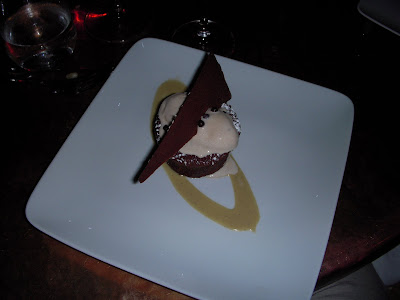 Unfortunately, I forgot to take a picture of the hangar steak. It looked so good and the wine that was served with it were perfect. The wine was Elyse, Le Corbeau. This was the one that was so good that we had to get another bottle.
The dessert was a warm chocolate hazelnut cake served with a red dessert wine, Voulet, Malvasia Rosso from Italy.

Overall, the value here is great. If you stick to the four courses with wine pairings it's less than $100/head. There is a reason this restaurant won for best wine program of the year.
If you stop in, tell them your read about it on Pleasures Of The Table.
Thanks for reading.

Posted by David Smelson at 11:38 AM No comments:

Have you ever found a place that shouldn't exist for purely logistical reasons? Think about The Inn at Little Washington. When that first started, there was little to recommend a trip there. Now it is the hub that supports that rest of the town.
When I visited my stepfather in NJ recently he told me about this ice cream shop called Bellevale Creamery. It was a half-hour drive into the wilderness of Warwick, NY. http://www.bellvalefarms.com/
His step-daughter works at the local DQ, so I figured this had to be good if we were going to make the drive. I wasn't disappointed. 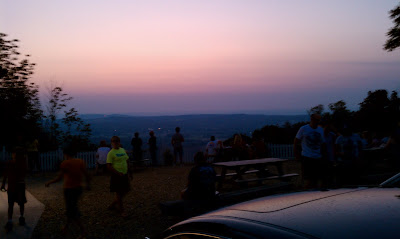 After spending 1/2 hour going up and down twisty 1-1/2 lane roads with very few cars in either direction you pull onto the summit of the mountain and you're greeted with a tremendous view of the Warwick Valley. Great place to catch dessert and watch the sun set. 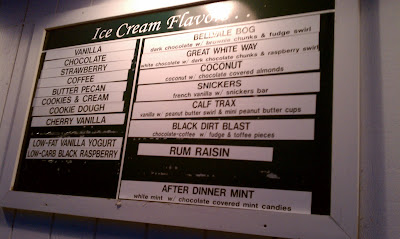 The flavors are inventive and the ice cream is top notch.
If you're ever up in the area check them out. They're worth a detour.
Until next time.....
Posted by David Smelson at 8:51 AM No comments: