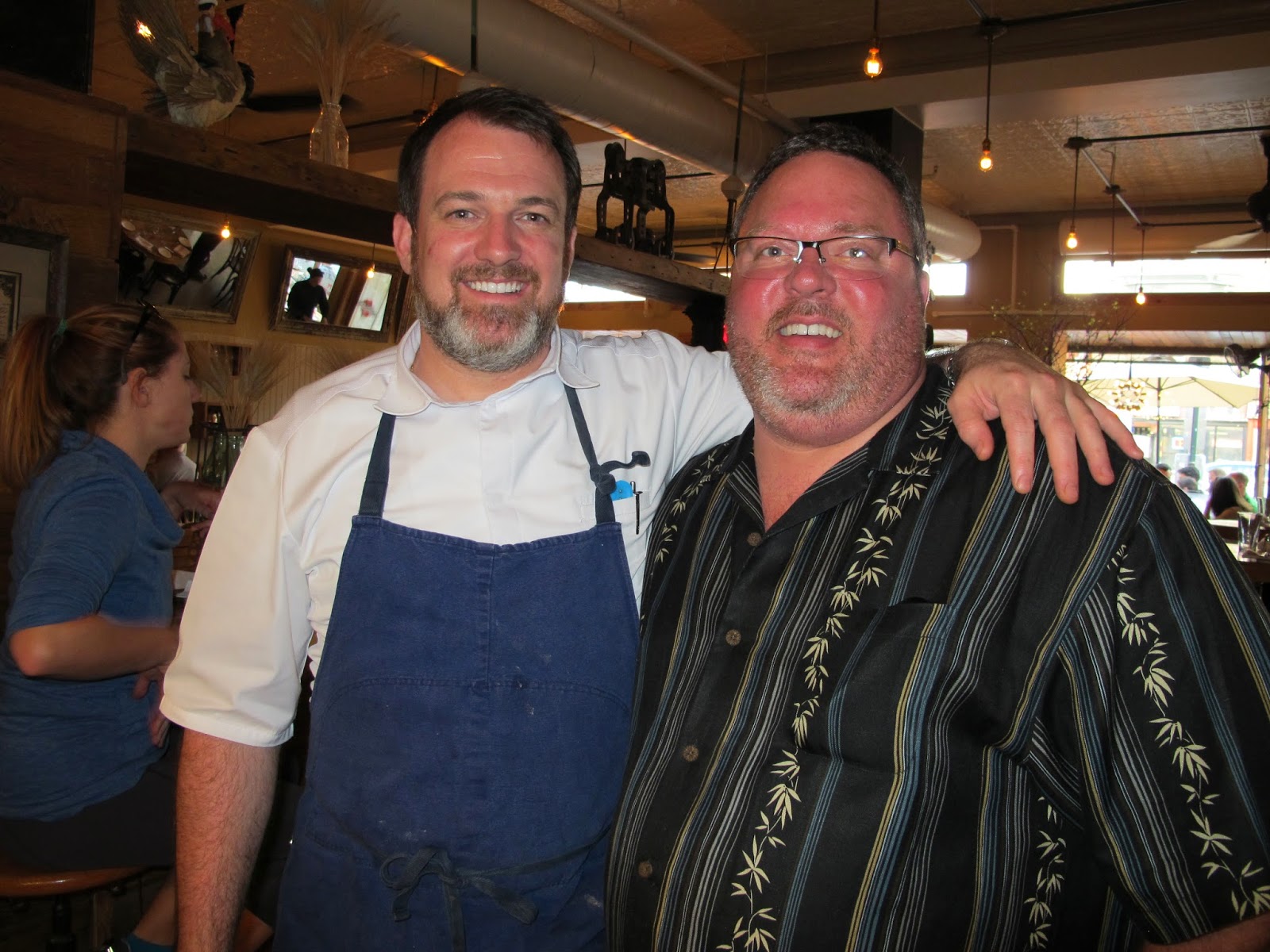 Per my usual, I had been slacking about getting to some restaurants that deserved a look-see. Mintwood was in the running and had been for some time.
I had the opportunity to grab dinner there last week because I had to drop Mrs. Smelson off at the White House Correspondents Association dinner and was going to be in the 'hood anyway. She'd be rubbing elbows with Doug Stamper, but I knew I'd be having better food.
Above is a picture of me in a post-prandial glow with Exec Chef and Partner Cedric Maupillier.
I've known Cedric since his days at Citronelle. He's an artist in the kitchen. Textures and colors are always spot-on when he's on the line. 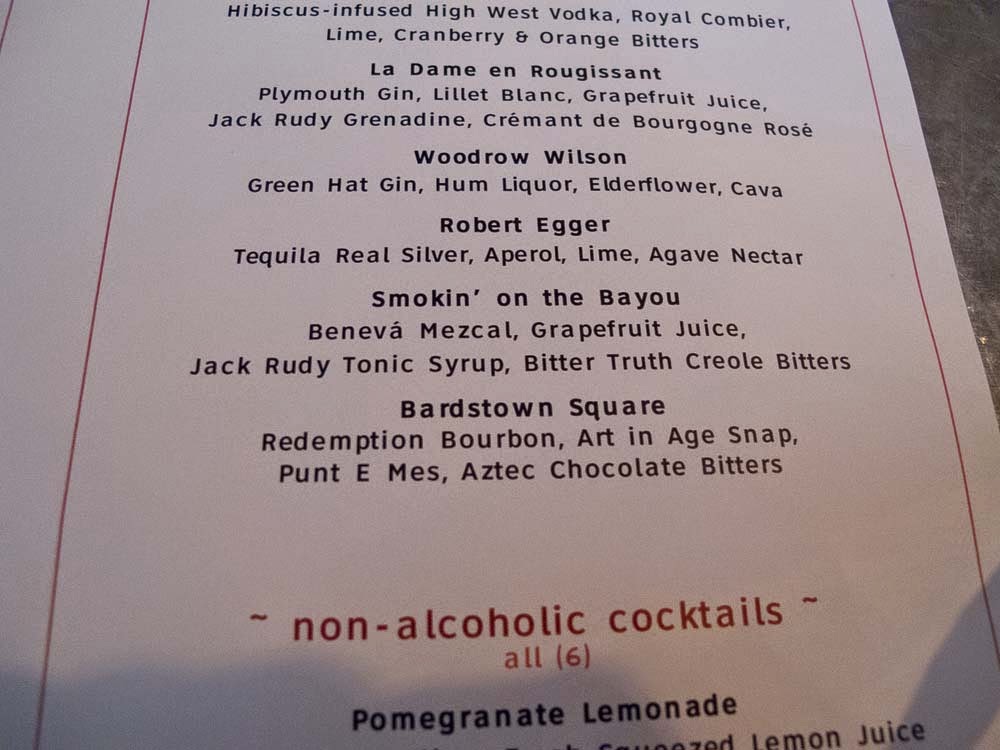 I knew the drink list was jumping when I saw Robert Egger's name on it. I ended up with a Bardstown Square though. 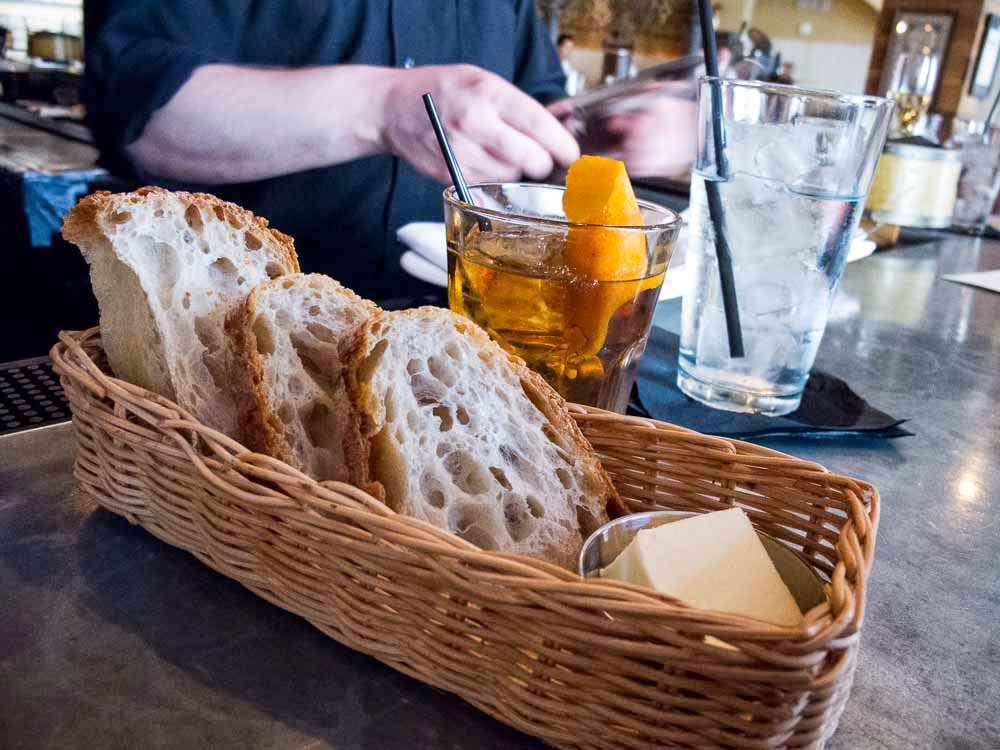 The bread here is reminiscent of Central. Too bad my wife wasn't with me. She's a better judge than I. Regardless, it was exactly as it should be: Crusty on the outside, light and airy on this inside It had a very pleasant sourdough taste to it 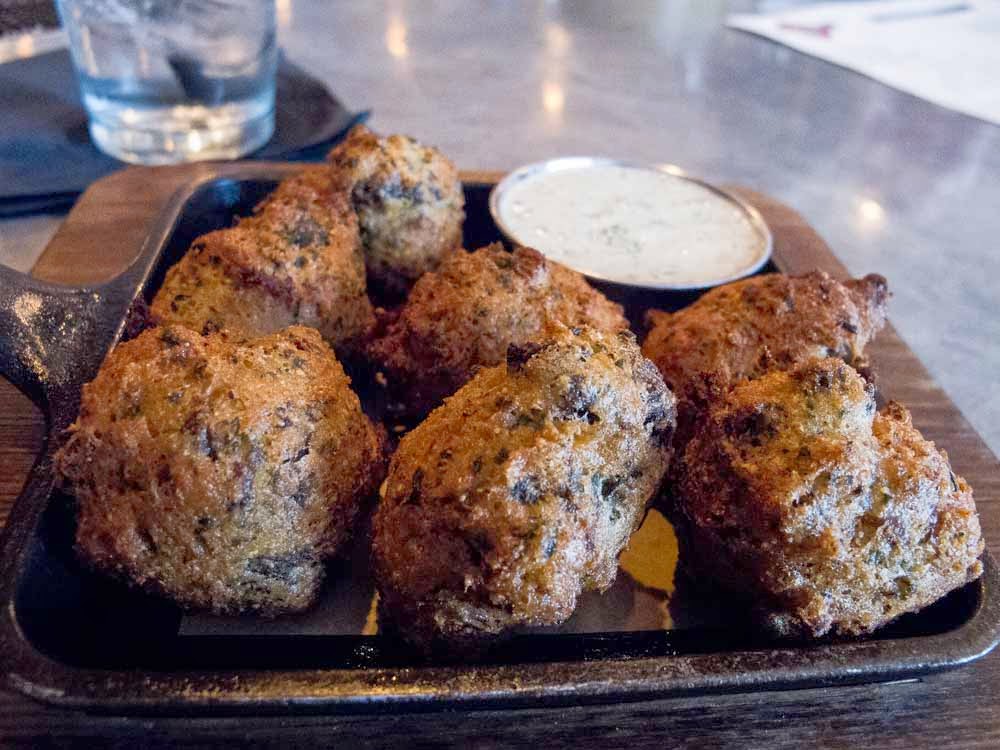 The first dish I ordered was the Escargot Hush Puppies Perfect texture and lighter than they look. 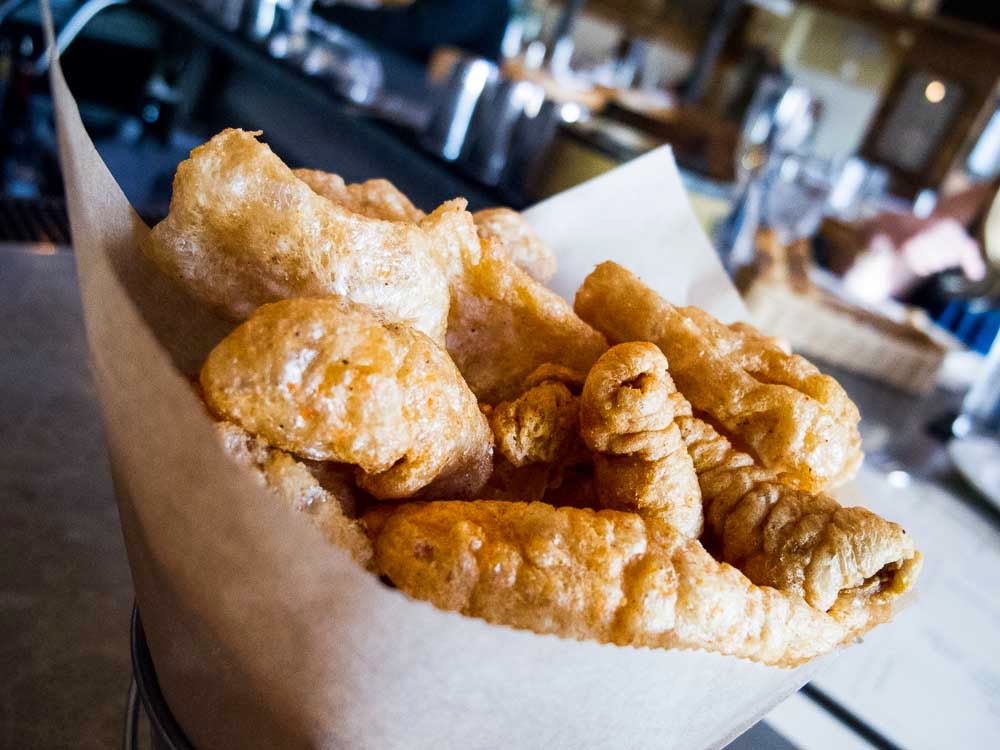 Next I had the Maple Pork Rinds. Nice and light with a slightly spicy dipping sauce. I had a couple and took the rest home to share with my neighbor. He's a big fan. 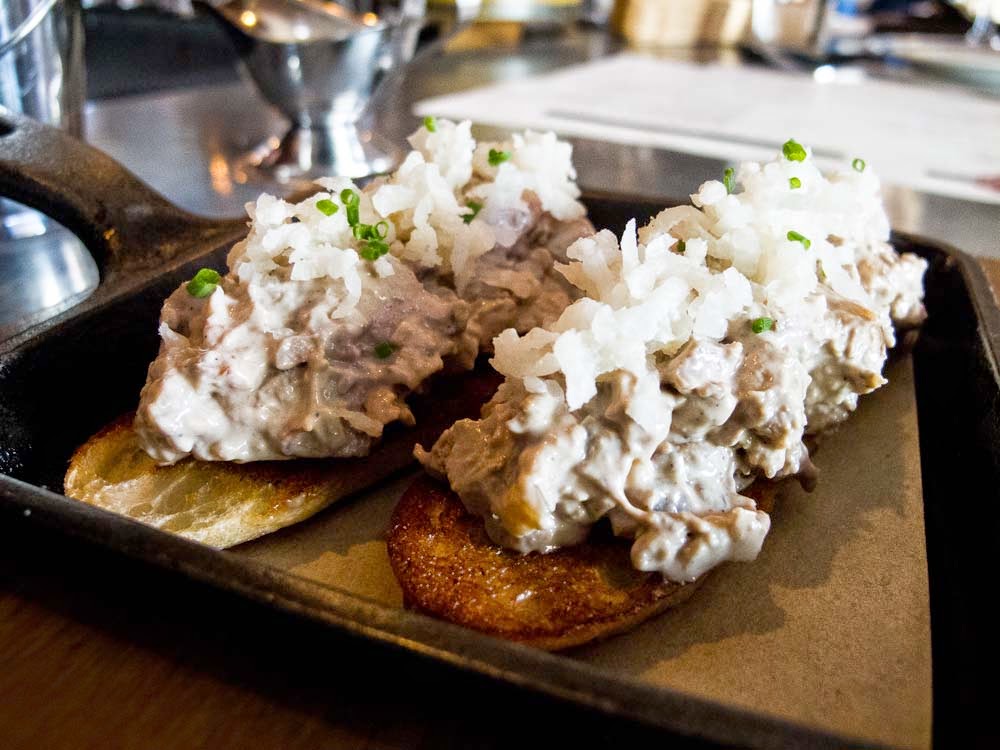 This was a chicken liver salad on a slightly soft piece of toasted bread. It looked like it was going to be ungainly to eat, but the bread was a perfect texture to match the liver. It was not like mom's chopped chicken liver. 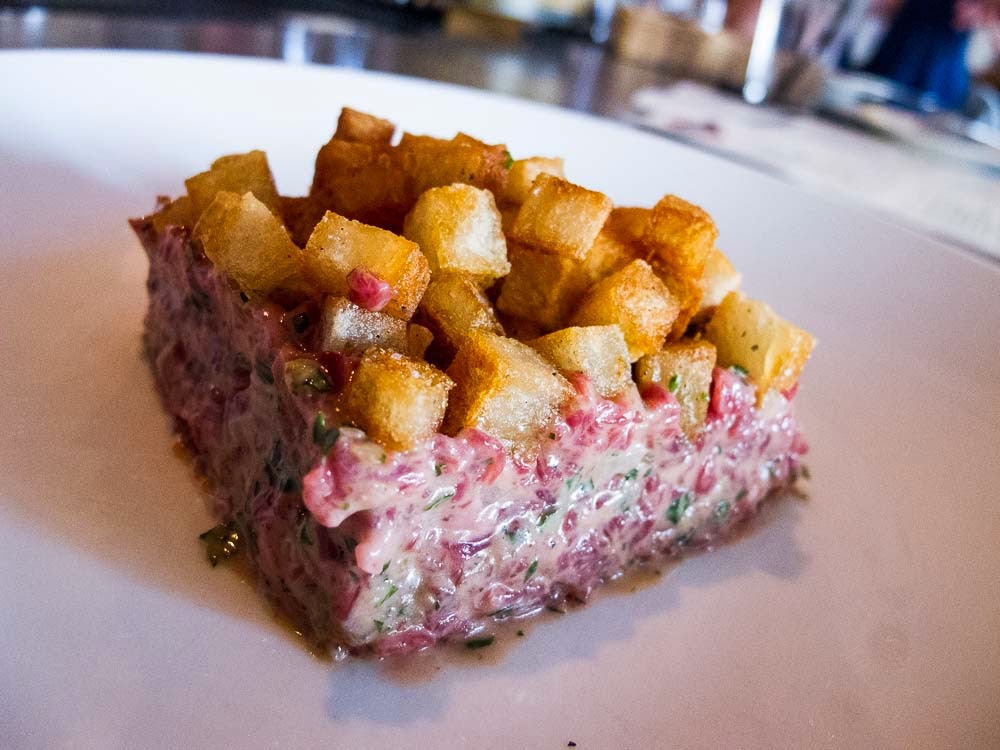 This dish was the winner of the night. The best Steak Tartare I've ever tasted, and I've had my share. The potatoes are crisp and hot while the steak is cool. It had a little zing to it, just enough to make it interesting, and the texture of the steak and the potatoes together was  a piece of art. Nicely done Chef!

As an aside, I was eating at the bar with two very nice ladies. We shared some of the appetizers shown above and they shared some of theirs with me, notably the kale salad with house-made burrata. Chef Cedric found a very nice mix between the over-crisped and substance lacking baked kale you sometimes see in restaurants and raw. It had texture that was still crisp, but not so much that all the water in it had evaporated.
The burrata was much better than you generally see in restaurants as well. It had flavor and salt, which can be lacking in some place's offerings.

Overall a great time and very pleasant service. I'm sorry I waited so long to try it out. So Chef, if you decide to come out to the 'burbs, keep 20854 in mind.

Posted by David Smelson at 10:27 PM No comments: