Yes, I was busy over the holidays, and to tell you the truth I haven't really had any great meals in places that had good enough lighting for me to take pictures. Sorry to disappoint. I made up for it last night though. Six friends/family members and I went to Range, Bryan Voltaggio's new restaurant in Chevy Chase. 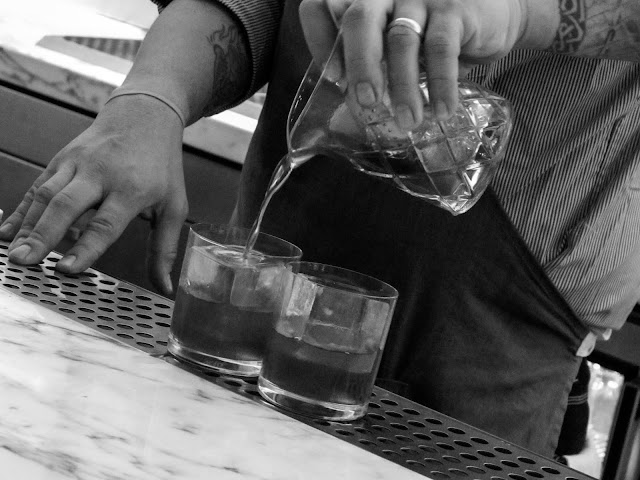 .
Here's a shot of one of the barmen creating a pair of fabulous cocktails. Note the huge cubes.  They are not only fun to look at, but functional as well.
Back to the story line though...Bryan was previously with Charlie Palmer and won some accolades there, but really came into his own with the restaurant Volt in Frederick.  I reviewed the restaurant a few years back when I had dinner at Table 21, which at the time was a four-seater with 21 courses.  You can read about that here - Table 21 at Volt Restaurant 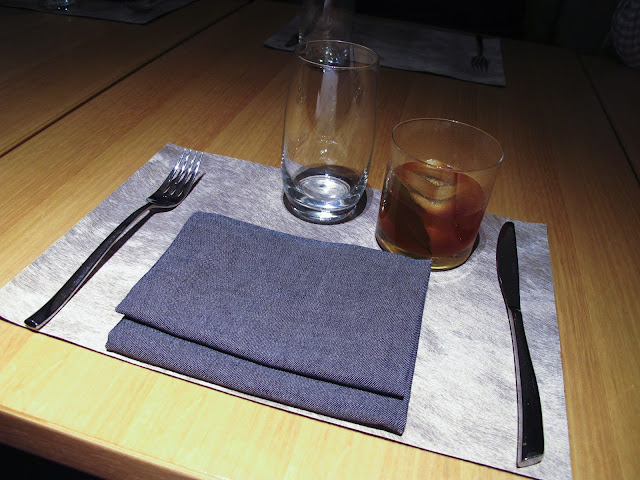 Range is NOT a trip down molecular gastronomy lane.  It is a place where you can take your family, or have a business meal, or just stop in for some chocolates and a coffee. It is accessible. It is, and this is going to be a shocker, a tremendous value.  More on that later. 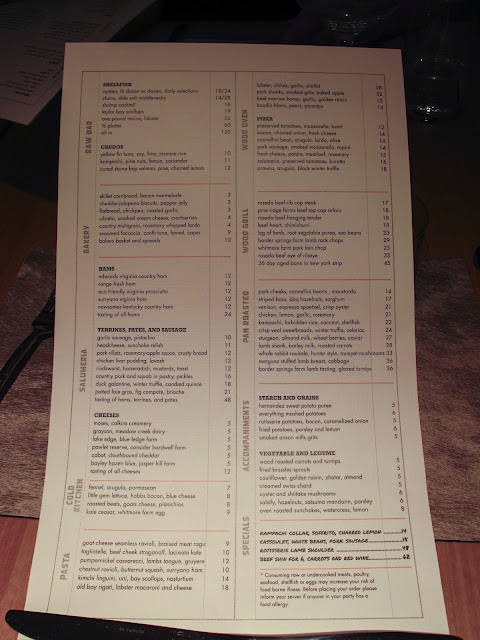 Here is a pic of the menu. 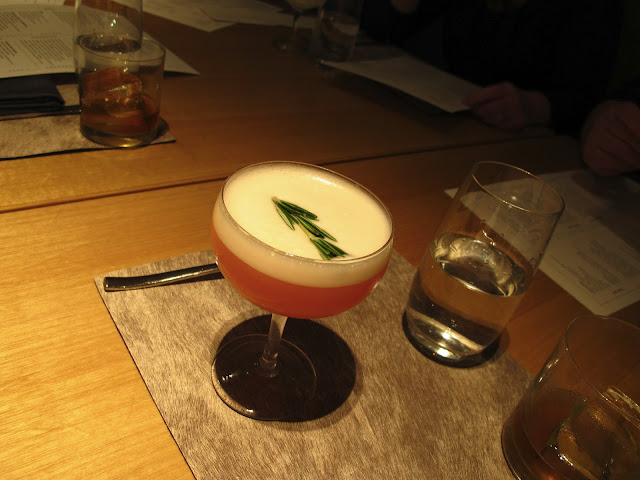 This is another of their tasty cocktails. 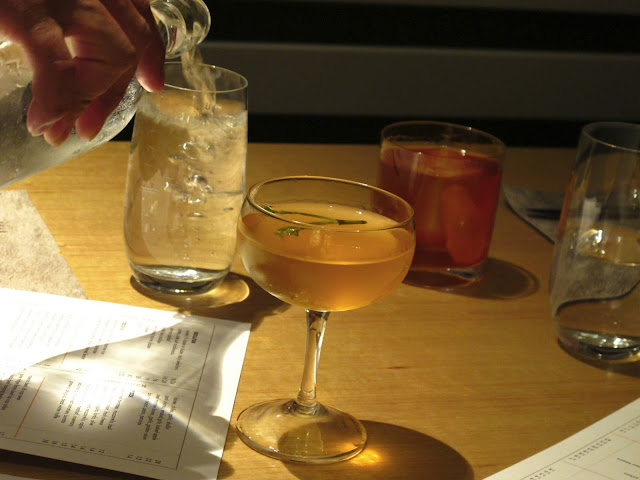 And another.  All of the cocktails are priced less than you would expect for such well thought-out and executed drinks. If you were to hit a bar downtown that had this kind of talent behind it (Owen Thomson) you'd be hitting $15.00-$20.00 per drink easily. 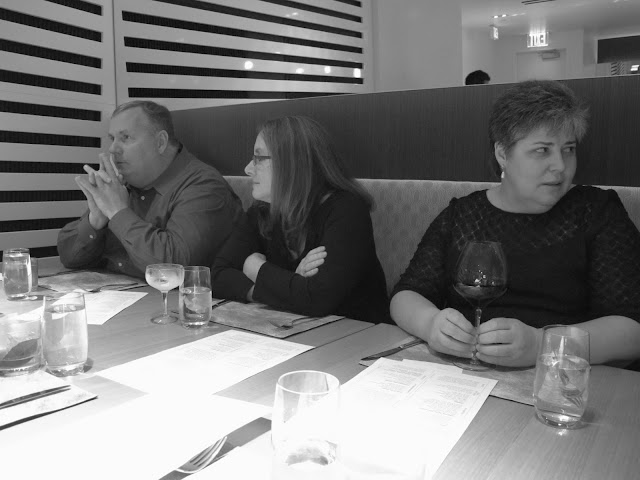 Some of my intrepid eaters: Shawn, Cheryl and Amelia. 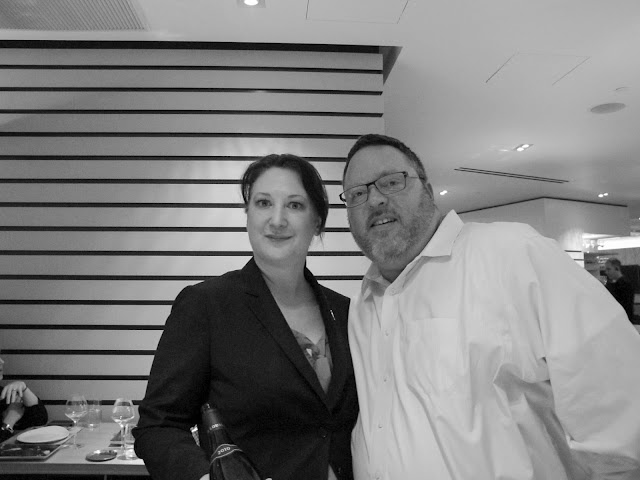 Kathy Morgan, MS. She chose our wines for the evening. She rocked them out, each one was something unique with memorable characteristics. Nothing middle of the road here, and nothing more than $60.00/bottle if I remember correctly.  It takes a master to give you an experience like that without breaking the bank in the process. 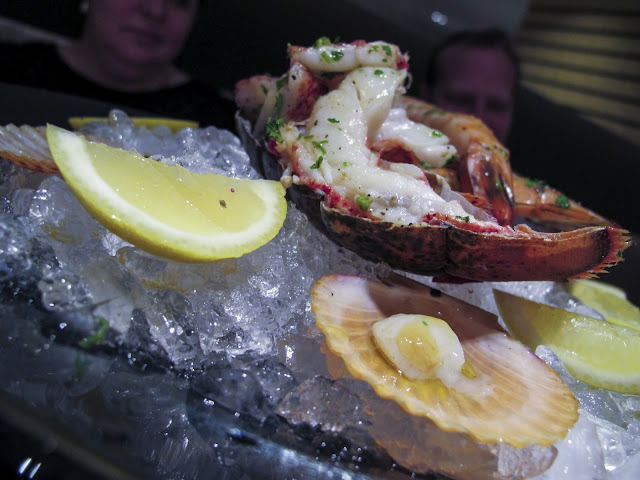 Perfectly cooked 1/2 Raw Bar Tower. Fresh, briny, served with several accompanying sauces which I didn't try. Everything was so fresh and succulent that I didn't want to sully the flavors.  I did, however, keep their fresh horseradish to nibble on after the tower was removed. 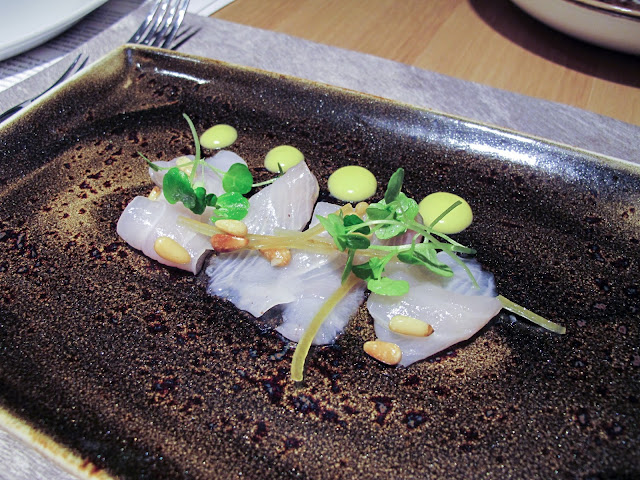 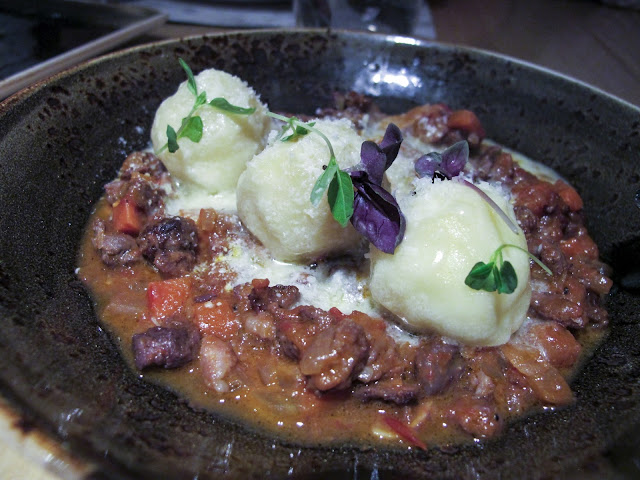 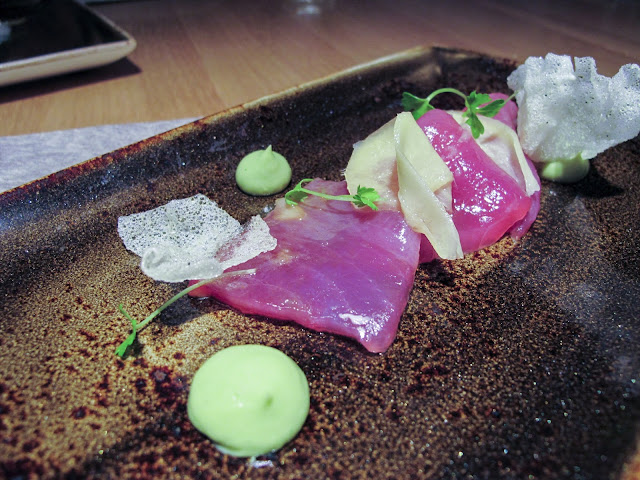 This one was not on the menu, but it was some beautiful fish. 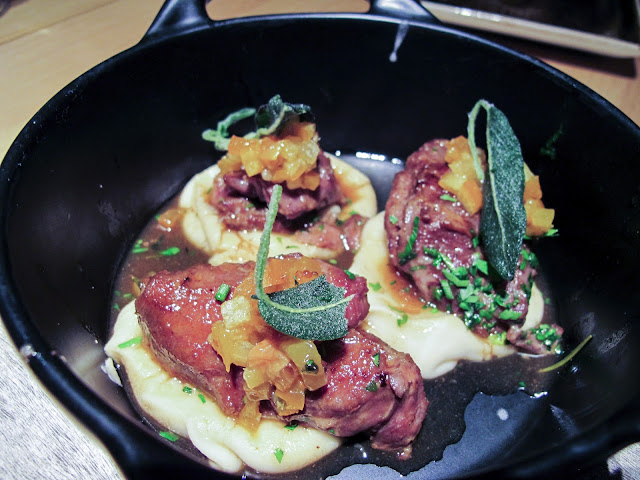 The pork cheeks with moustarda. 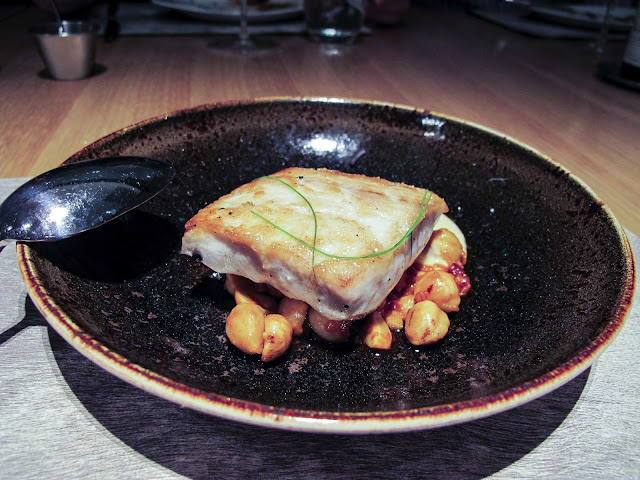 The Kampachi with hazelnuts. Perfectly crisp on top, flaky/tender inside. 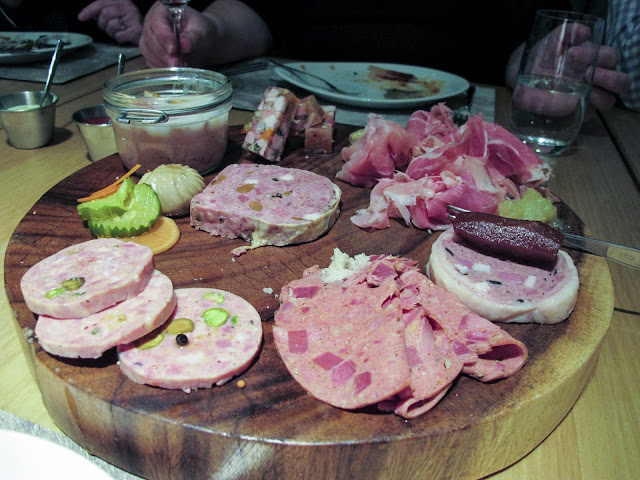 Wonders abound on the charcuterie plate. I was particularly fond of the pork rillettes and the duck galantine. 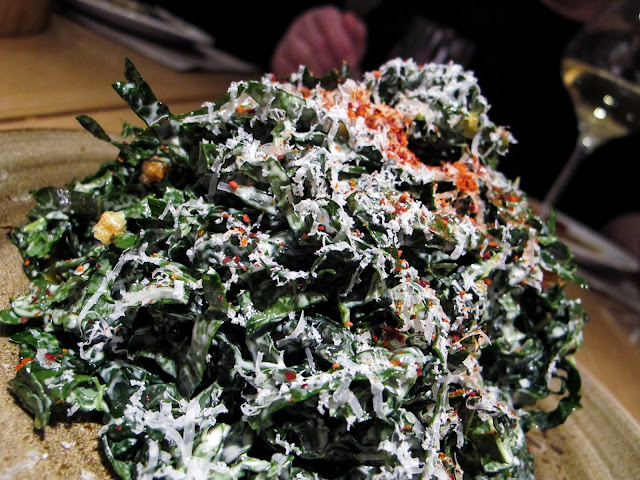 This was the kale Caesar. 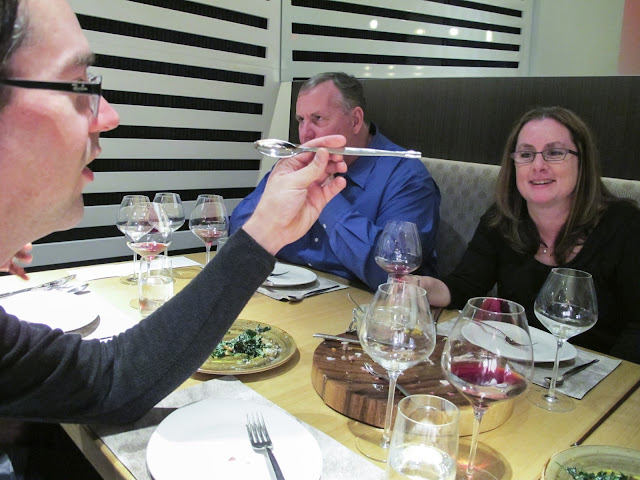 That is one fancy spork. I think it was meant for the marrow bones. 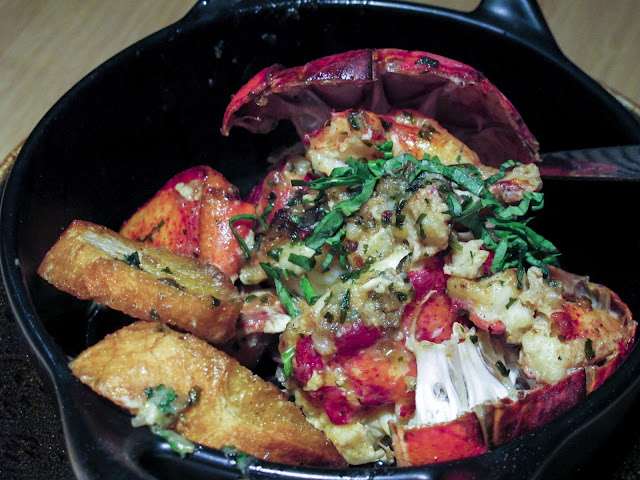 This is the lobster with garlic and chilies. The bread that came with it was soaked in the jus. This was one of my favorite dishes. 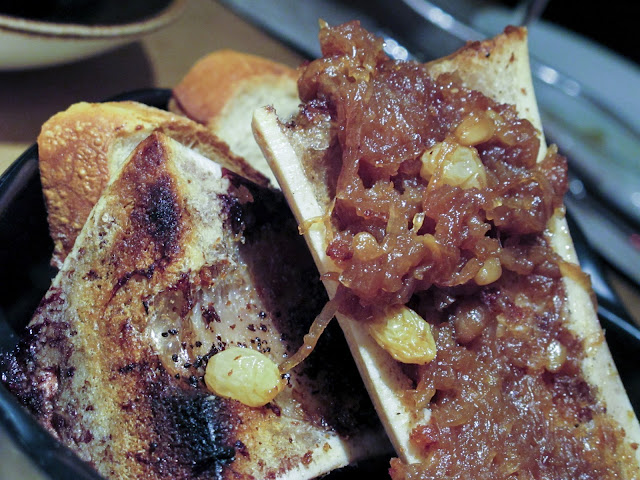 Not everyone is a fan of bone marrow, but I sure am. One had the raisin topping and one didn't. I liked them both, but the pristine version with the just-crisped top was worth the trip by itself.  Mmmmm. 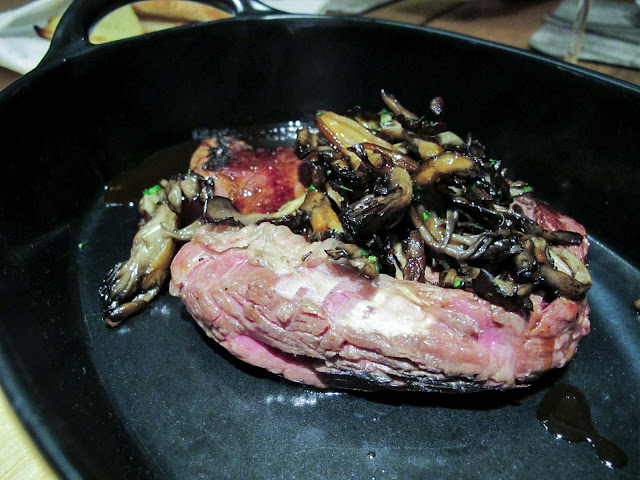 This is the rib eye with mushrooms. Very nice. 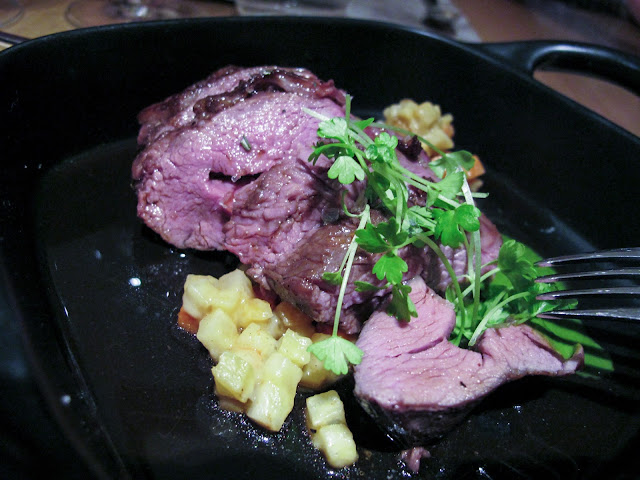 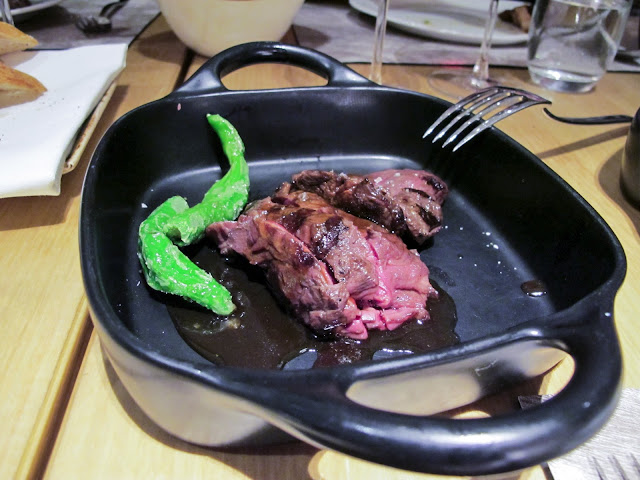 Of the two steaks this was my favorite.  The Roseda Hanging Tender. I managed to bring some home and my son had it for lunch. He closed his eyes and chewed....going MMmmmm. 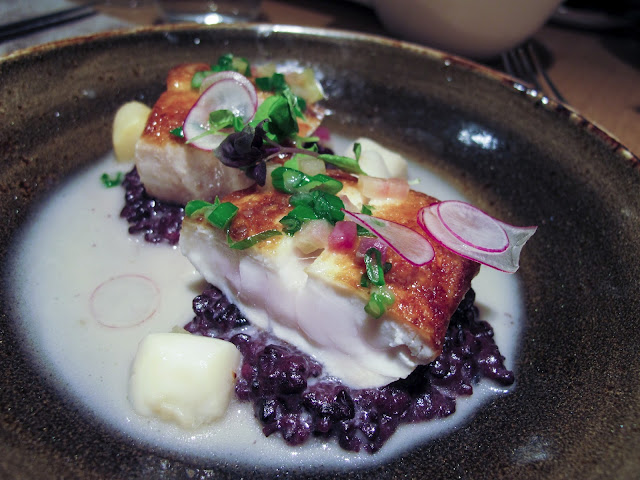 This is Kampachi with forbidden grains and coconut. Once again, perfectly crisped with a tender inside. 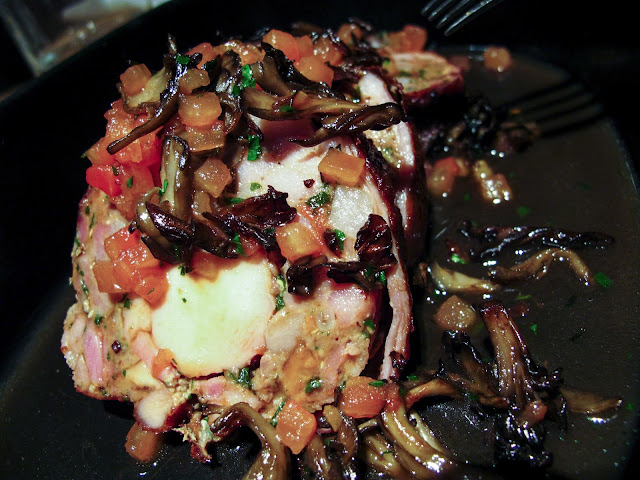 This is the whole stuffed rabbit. Very earthy. Takes you right to the woods. 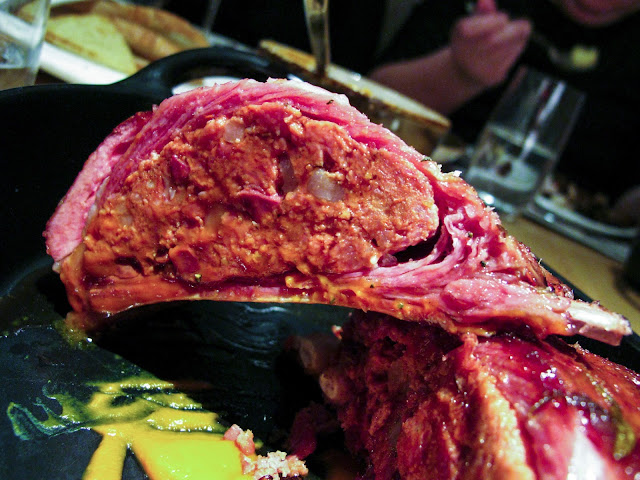 This came to the table last.  It's the  merguez stuffed lamb breast. Very well-spiced sausage cooked to perfection. I was able to bring some of this home as well and it was a great addition to lunch today. 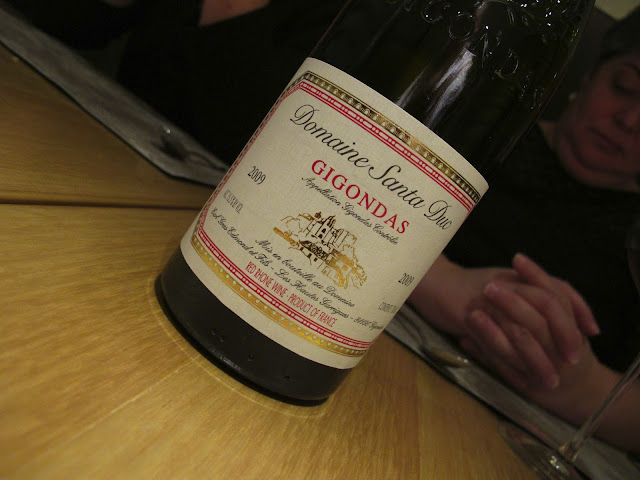 This was the favorite wine of the night...or at least for half of us.  The rest were enthralled by the Muscato that came with desert. I didn't get a picture of that bottle...8( 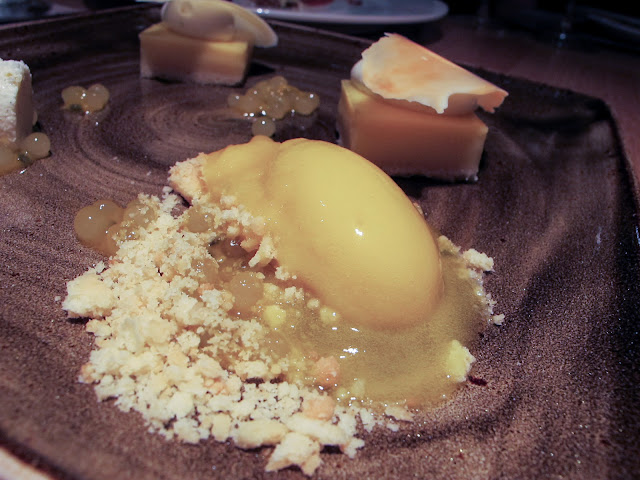 There were various sorbets and tastings of things for dessert. 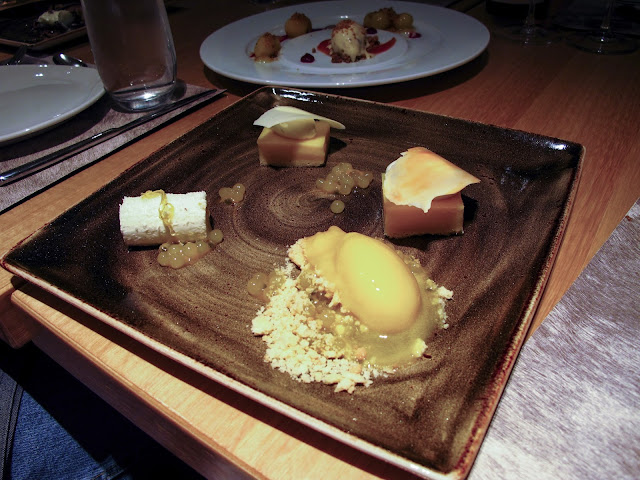 In these pix you don't see the various side dishes including sweet potatoes, mashed potatoes, mushrooms, brussel sprouts, and other things. There wasn't a poor recipe or execution among them.

What you also don't see is the level of service we received. It was very gracious and fun. Never overbearing or pretentious. I asked our server, Nema, to order for us and keep the food coming until we cried Uncle. She did that in spectacular form, incorporating the dishes that we specifically asked for.
There were a few hiccups with timing, but that is to be expected as this is a very new place and everyone is still getting their sea-legs.
Just a mention of the Home Cooking in the title? These recipes and preparations are classic with a little updating in some cases. Whole-animal usage is the order of the day here, and hopefully it will catch on in more venues. It is what it's supposed to be, and it's awesome.
Regarding my earlier comment about value? We spent about $130 per person including tip. I've had meals that cost twice that and delivered less than half the satisfaction. This is the new Must Try DC Restaurant.
Congratulations team Range.

Posted by David Smelson at 4:28 PM No comments: