Honeysuckle is pretty cool. I mean, it's really cool. It's low-key. It's down-to-earth, it's a restaurant guy's kind of restaurant. You can go in a pair of jeans and nice t-shirt, or a tie and jacket. Either way you'll feel at home.
Hamilton Johnson is cool too. He's a real human who doesn't put up a facade. He's out there living loud for everyone to see. His posts on social media are pretty much unfiltered. He shows his vulnerability, happiness, and adventures. I've been following him for a while, since his days with Jeff Buben at the now-shuttered Vidalia (which has been reclaimed by Hamilton and transformed into Honeysuckle) and it's been fun watching him.

Background aside, as some of you may or may not know I'm back working with independent restaurants again. I'd been working for a multi-national company for the past couple of years and didn't make it downtown too much during that time. Wow has DC changed. Was it always this bohemian? By 8:00pm there were people dancing in the streets and passing joints around on the sidewalk. Crazy.

Back to the subject at hand - 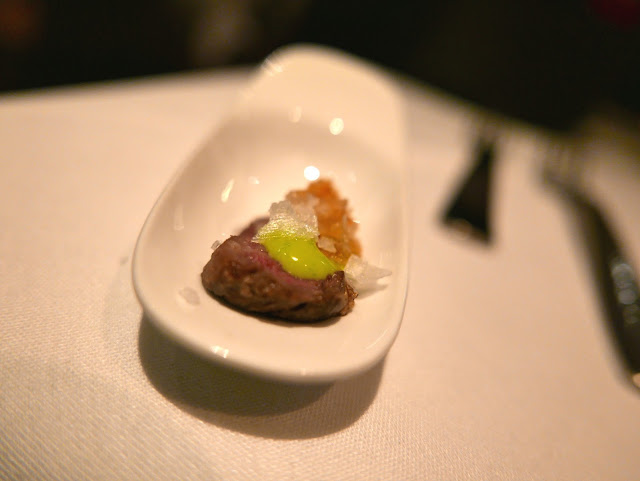 The amuse that came to our table was a foreshadowing of things to come: tart, salt, herb, and umami. 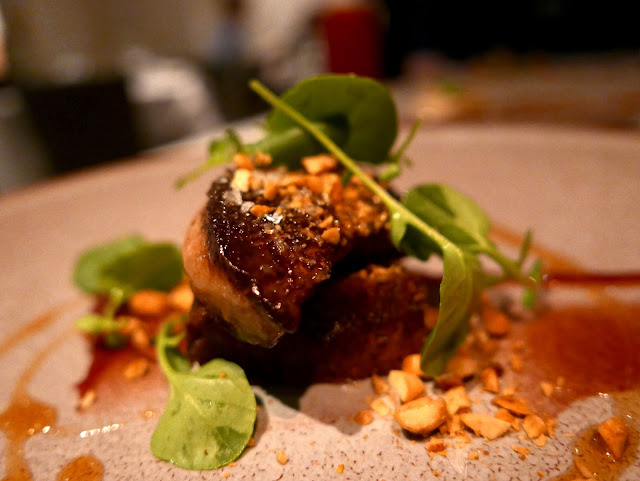 I'm a sucker for fois gras, and this health-sized chunk of seared ambrosia came from Hudson Valley. There was some slightly-caramelized zucchini bread with a cherry-rhubarb jam, spiced peanuts and a CocaCola caramel. 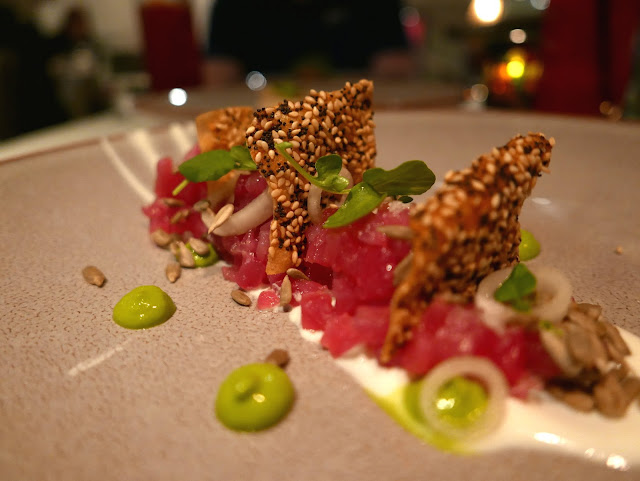 My son Alex is a sucker for raw fish in pretty much any form. He started out with the Ahi Tuna Tartare. When you get everything on the plate together the flavors pull together for a very satisfying finish. There's a lot more going on than raw tuna with mustard. 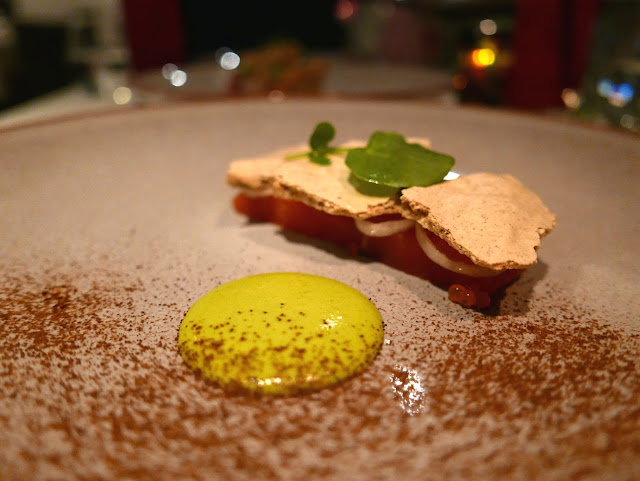 This is the Citrus Cured Trout - the rye meringue was very neat. That being said, I wonder what this dish would have looked like with the meringue on the bottom? There was smoked roe and pickled onions under there. Very tasty. 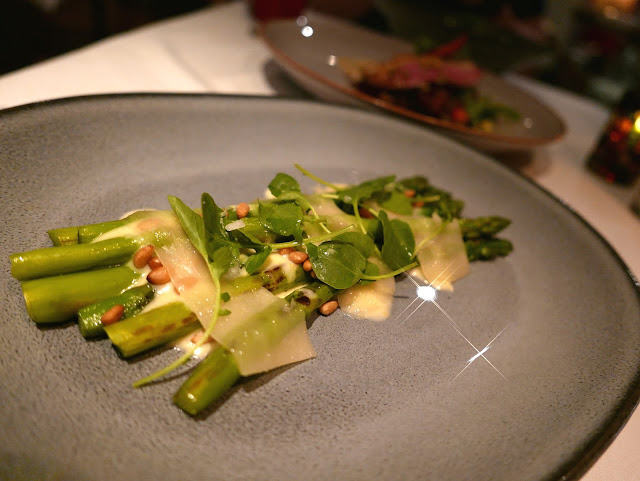 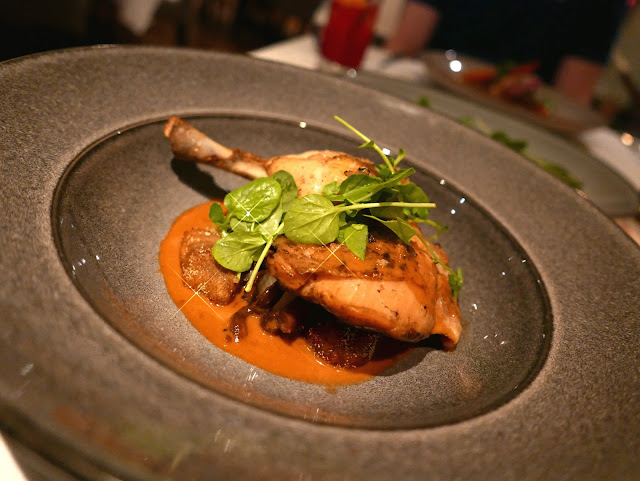 Alex got the Chicken and Dumplings. He's not a big fan of mushrooms so I was surprised he ordered it, but glad he did as I got to finish off the fresh oyster mushrooms in the sauce chasseur. The chicken itself was billed as a confit. It may have been, but not in the traditional crisp-skinned sense. The meat tasted as if it were, that's for sure. It was rich and very flavorful. 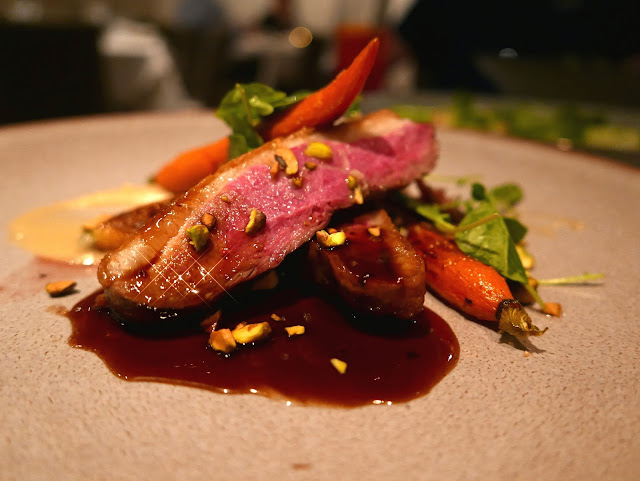 I ordered the Spice-Crusted Duck Breast. Wow that was good. Our server recommended mid-rare, so I went with it. Sometimes restaurants do that and what comes out is an inedible, tough piece of bloody poultry. Not the case here. It cut and chewed like a good steak. Perfection. 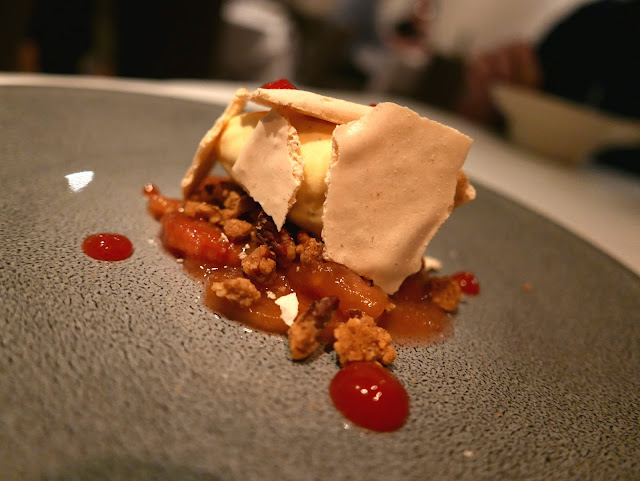 Last, but certainly not least, was the dish that enticed me to come to this restaurant on this night. Foie Gras ice cream. I saw a post on Instagram of Hamilton making this and I had to come try it. It was all that. Think very creamy ice cream with a hint of foie and grandma's spiced apple pie with crumbled brown-sugar goodness.

Bravo Chef. I apologize for waiting so long to try you out, but will certainly be recommending Honeysuckle in the future.

Posted by David Smelson at 8:12 PM No comments: