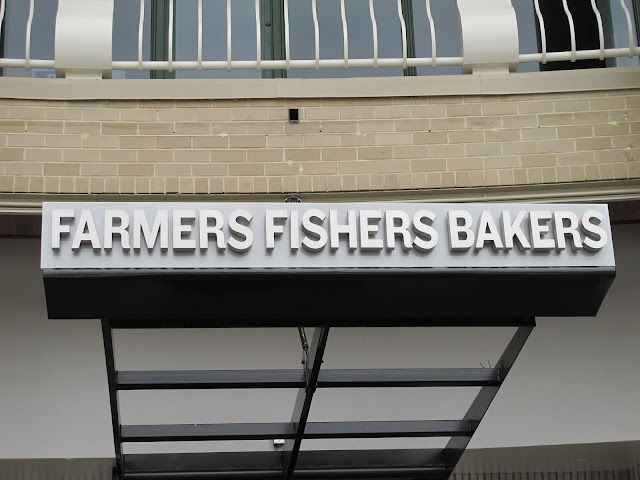 They were gone for a while, but now they're back, though it's no longer Founding Farmers or Farmers and Fishers. This is a new restaurant all together.
All of the restaurants at the waterfront in Georgetown got flooded during a huge storm about 2 years ago and FFB joins Tony and Joe's in whole restaurant makeovers.
\
I always liked the layout and attention to detail in the construction of the original Founding Farmers. VSAG has taken this to a new level in Farmers Fishers Bakers. 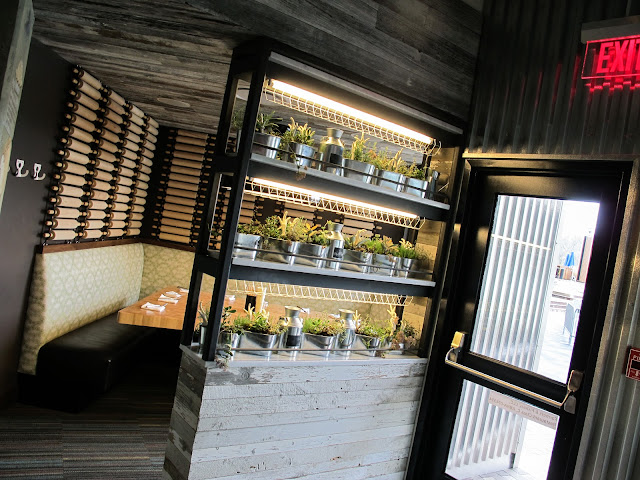 These folks like to do a lot of things from scratch and they're not shy about sharing it.  Many of their herbs, preserved foods, and other staples are on display for you to see.  This slightly secluded area is to your right after you walk in the main entrance. Note the wall decorations... 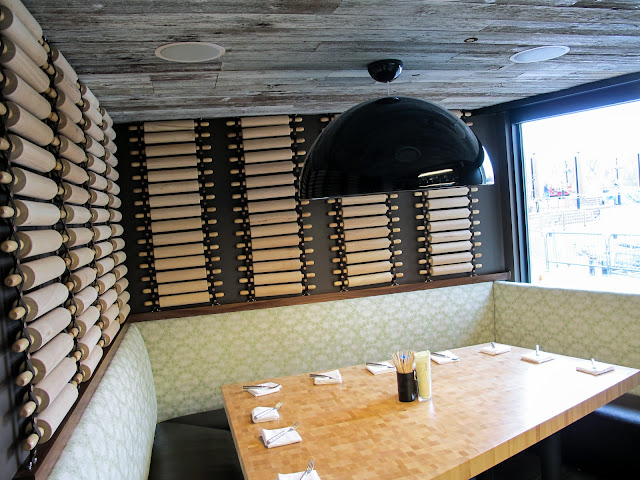 Here's another shot of that table. 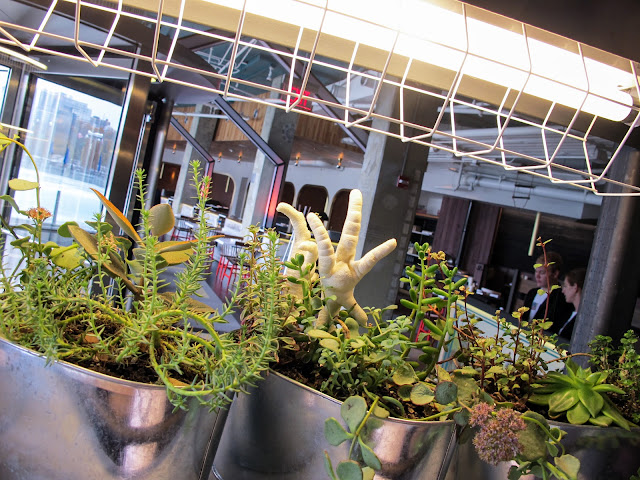 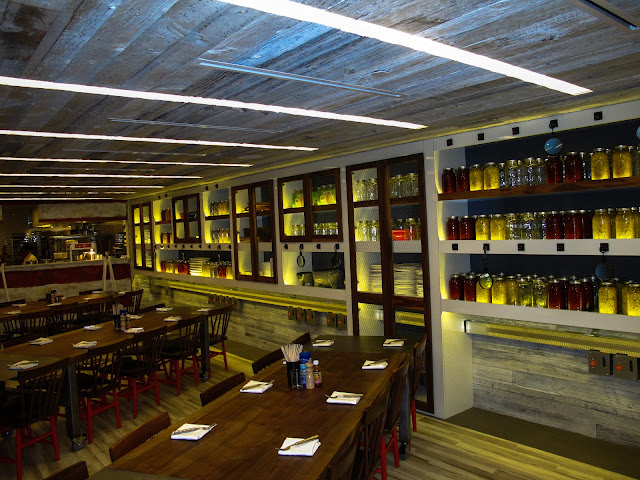 This is the dining room to the right.  It's lined with goodies they can/preserve for use in the restaurant. 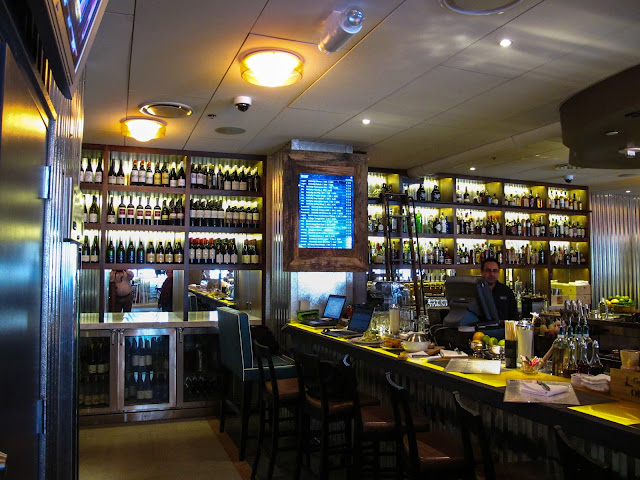 This is the bar, which has been moved to a more central location and has many more seats that than the original configuration.  That's Mr. Aroyo, mixologist extraordinaire hiding in the back. 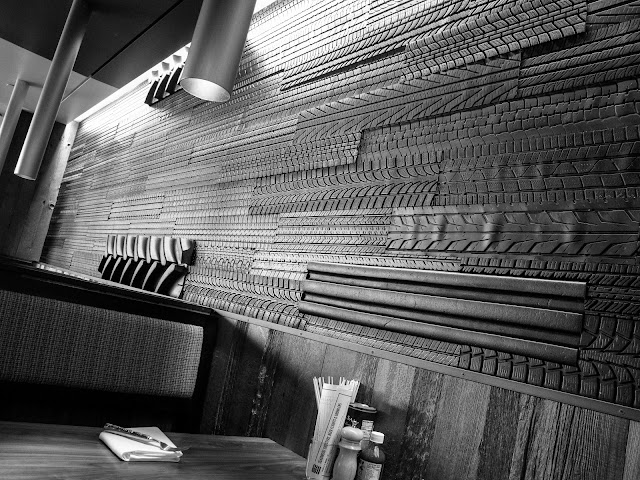 Reclaimed furnishings and decorations are the order of the day here.  Note the tires...real tires, not tire patterns. 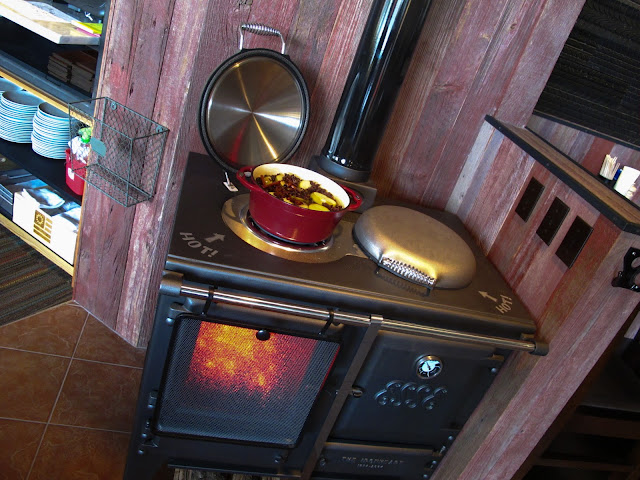 This stove had a potpourri with star anise and oranges boiling on it...you could smell it throughout the restaurant.  Very nice. 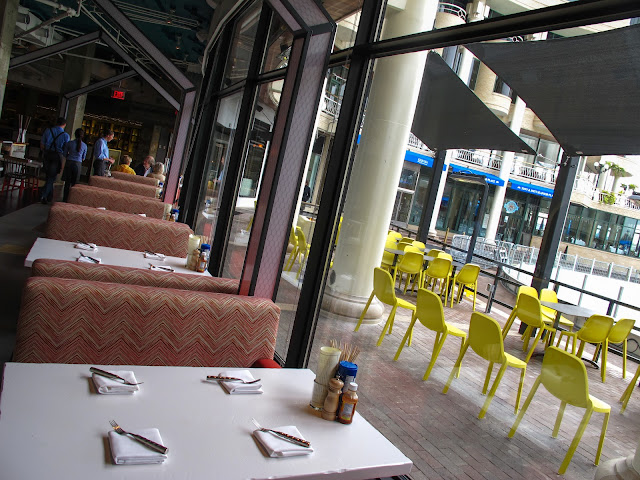 This is a view from the dining room to the left.  Lots of outside space overlooking the fountain. 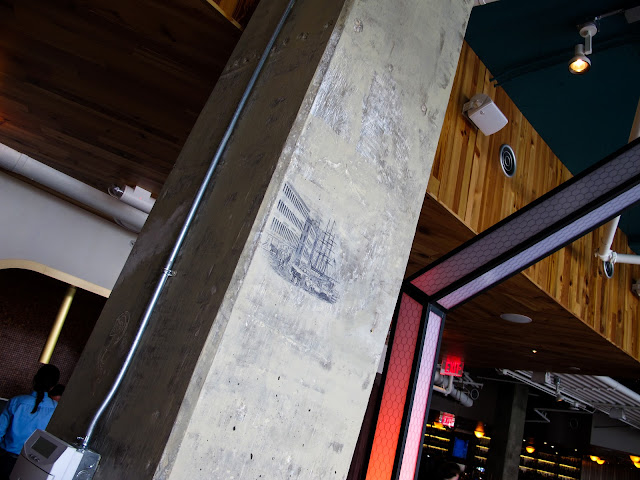 Many of the columns have art on them.  Neat touch. 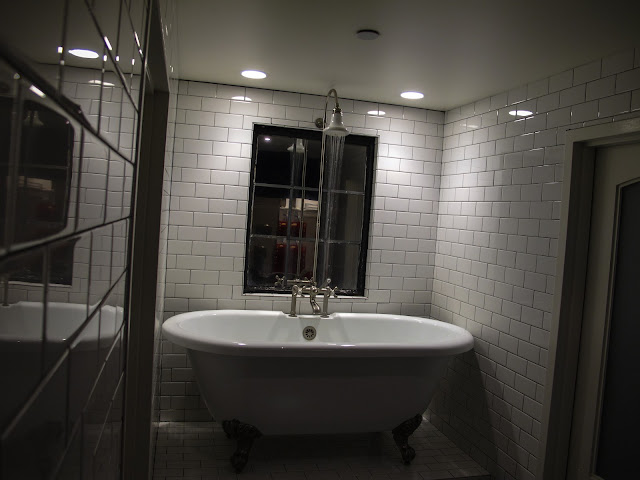 This is a water sculpture of sorts, with the men's room to the right and the lady's room door to the left.....note the window behind the tub.... 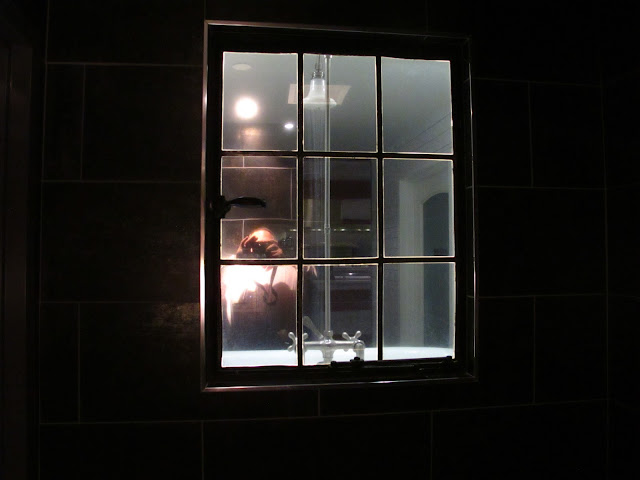 The window behind the tub is notable because it is made of one-way glass.  This is the view from the commode in the men's room.  You can actually see directly into the restaurant while you're sitting on the john. I did not have occasion to use it, so I'm not sure if it would be liberating or induce some serious stage-fright.  Time will tell. 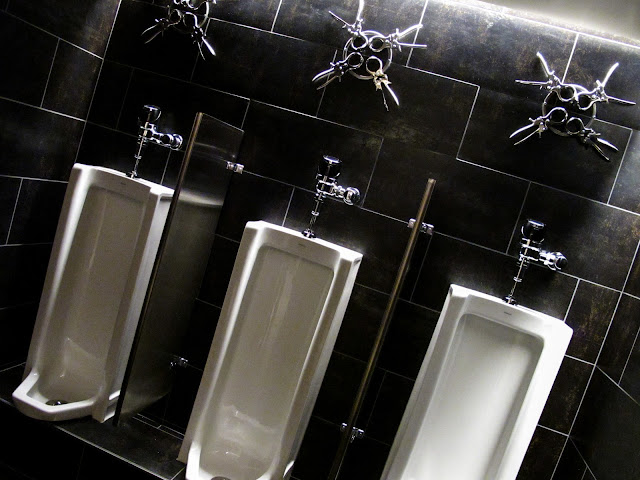 The fun doesn't stop with the commode.  Note the pincer art above the urinals. 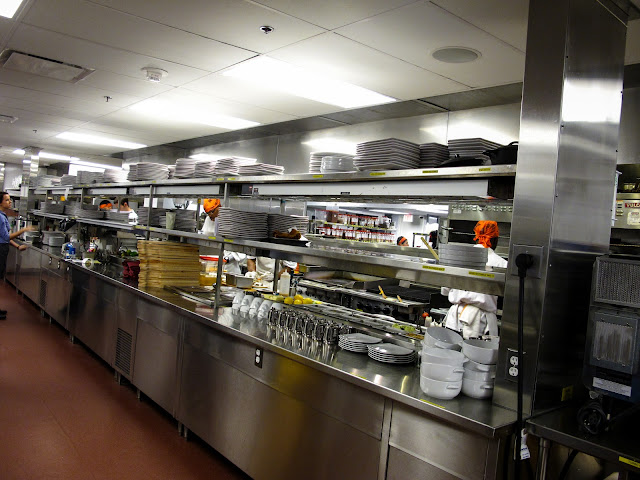 The kitchen didn't lose much space in the remodel.  It's huge.  Nicely tended to as well. 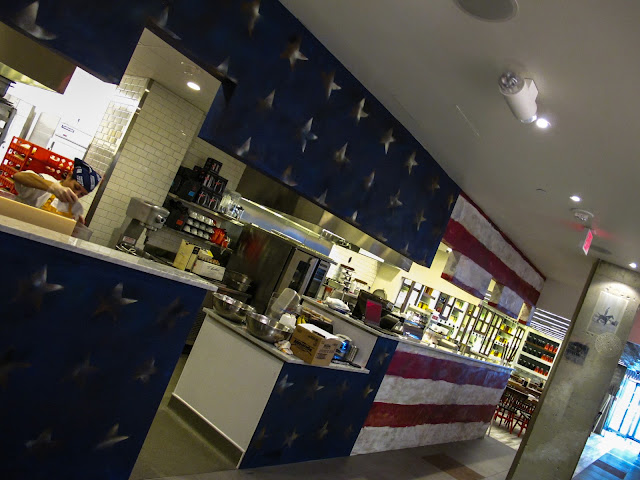 The bakery part of the kitchen is open to the dining room.  Nice artwork on the fronting.  They produce baked goods for their other restaurants here as well. 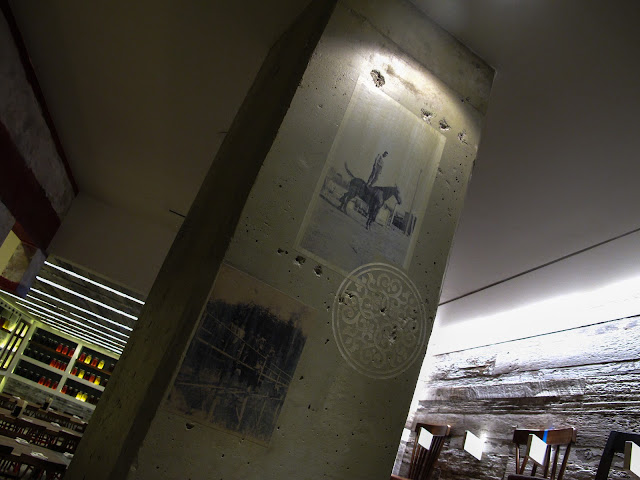 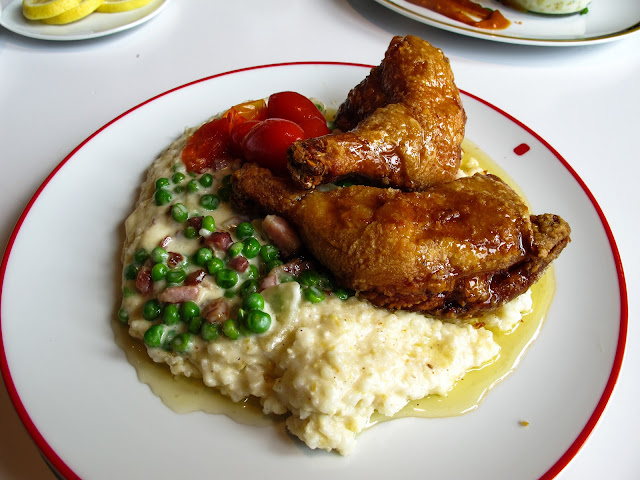 Last, but not least, Fried Chicken with Grits.  Very good.  This was as crispy as some of the best duck confit you're likely to have.  The grits had just enough acid to balance out the creaminess. 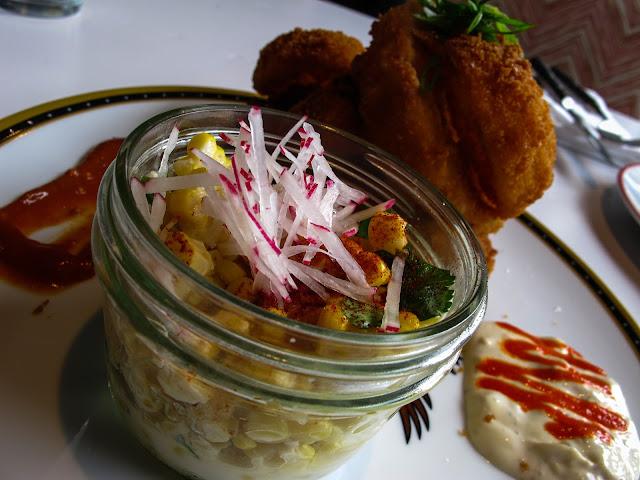 This was my dining companion's meal of Chicken Tenders with Street Corn Off the Cobb.  I didn't get to taste it, but it looked good. 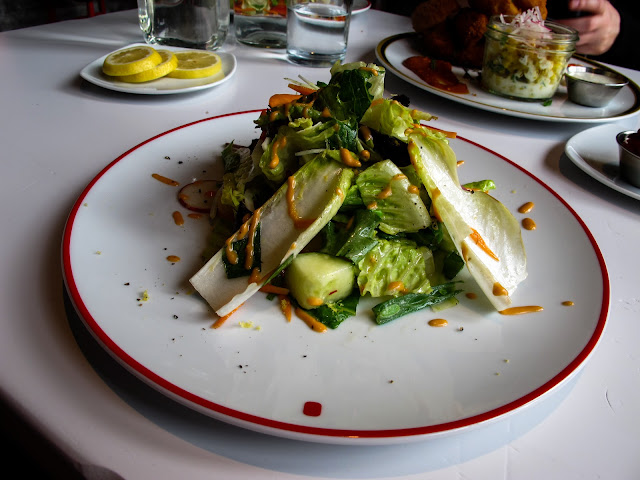 To help scrub some of that cholesterol out of my veins I had a side salad named Drag Through The Garden. As you'd expect, it was tasty and had nice fresh veggies.

Bottom line?  A nice comeback from a very unfortunate flood.  The new restaurant that has risen from the ashes of the old is superior and I wish them the best of luck.

If you stop in, tell them you read about it on Pleasures of the Table.
Thank you.

Howdy all.  This is not a fast and furious recipe.  It will take you a few hours, but the end result is worth it.
Let's start with the ingredients so you can get your mise' en place working. I adapted the recipe from Ruth Reichl's Gourmet cookbook. 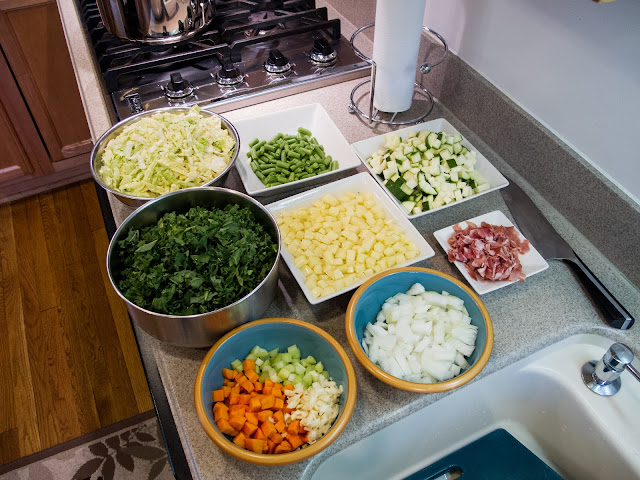 Here's most of the mise'.  Remember to make cut everything down to the size you want it to be on the spoon.  I would have probably cut my zucchini a little finer....So you start by heating the oil in a big pot.  Let it shimmer, then add your pork of choice. Saute until just browned. 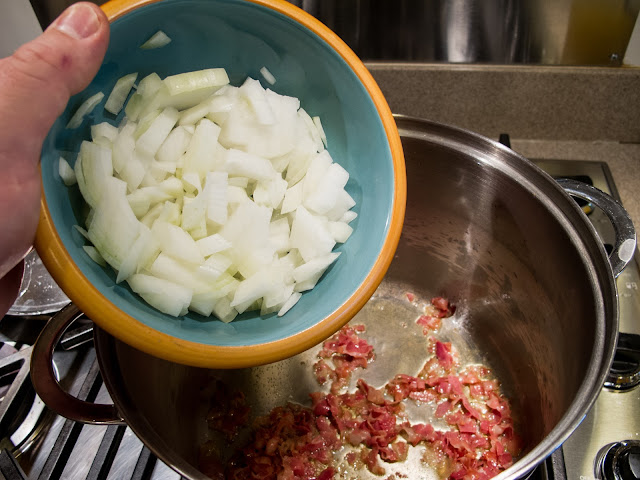 Add your onions and cook, stirring fairly frequently, until they are softened, then.... 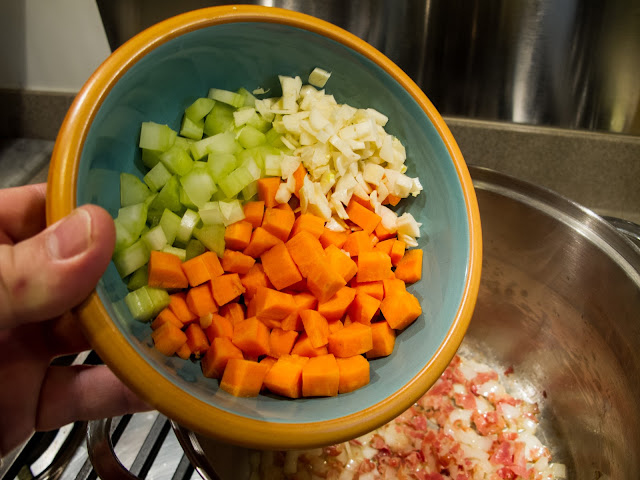 Add your carrots, celery, and garlic.  Cook for five minutes, stirring, then.... 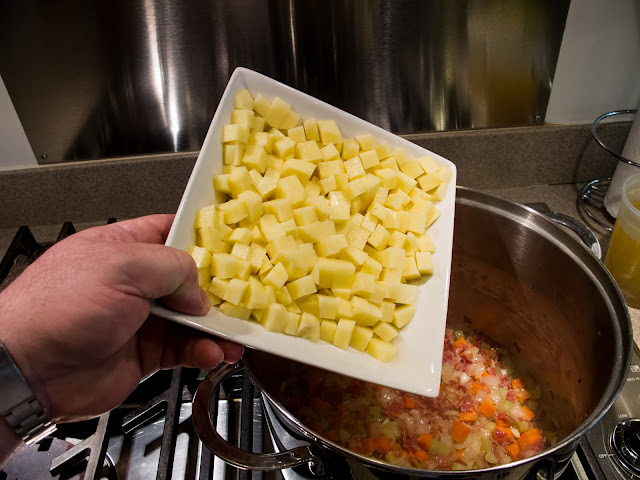 Add your beautifully cubed potatoes.  Continue cooking those for five minutes, stirring, then.... 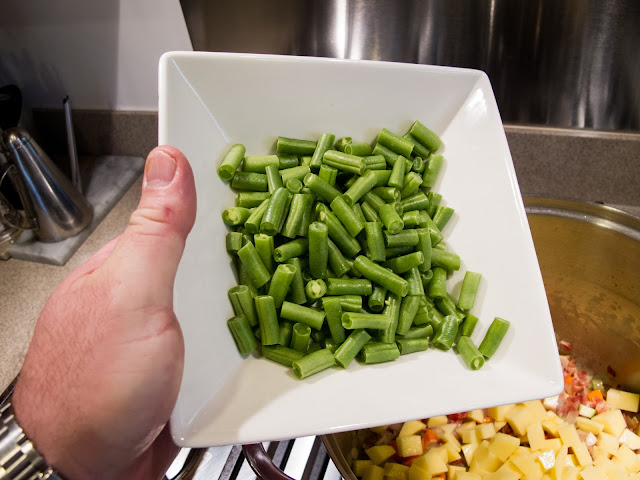 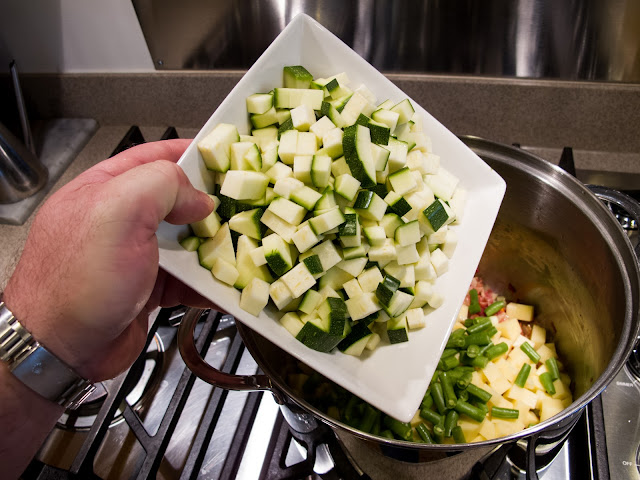 Add your perfectly cubed zucchini.  Continue cooking and stirring for another five minutes, then... 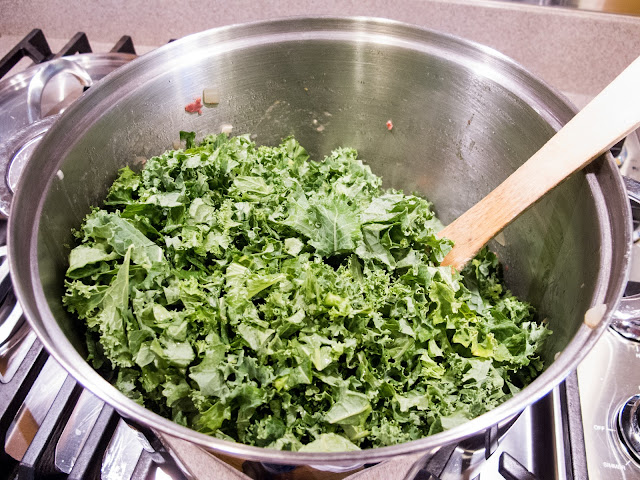 Stir in your kale.  Let that cook down for a few minutes, stirring occasionally, then add... 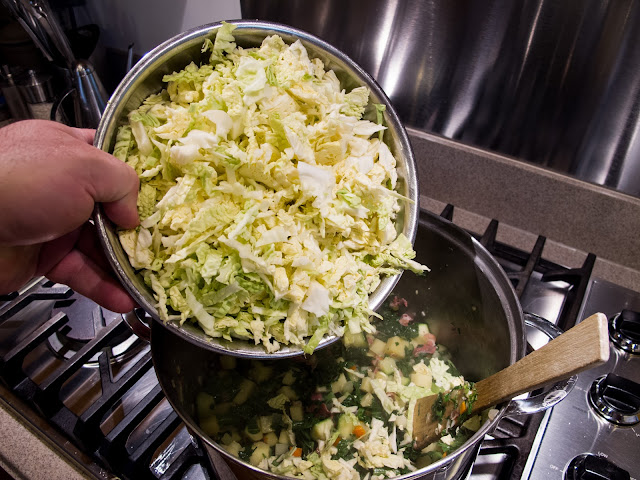 Your Savoy cabbage.  Same deal...cook down for a few minutes, then add about 4 cups of the chicken stock and.... 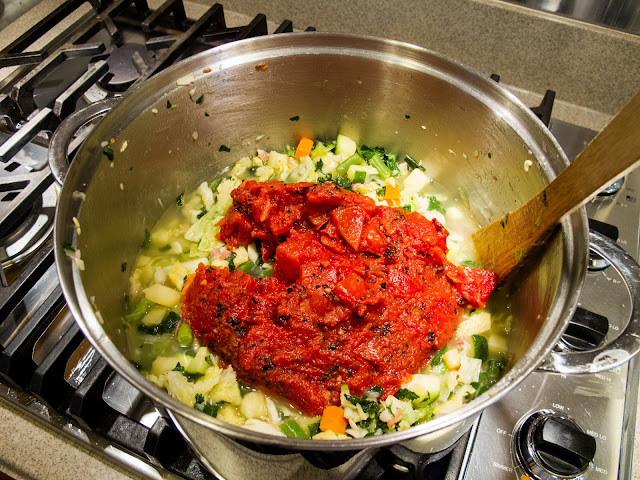 Your tomatoes.  I used some canned fire-roasted tomatoes.  When I make it again I may go fresh.  Always a better option if you can, though finding good tomatoes at this time of year can be a challenge.  Stir this all together and let it simmer for an hour.
After an hour, pure 1/2 the white beans and the liquid from the can in a food processor, then add the the pureed and unpureed beans to the soup. 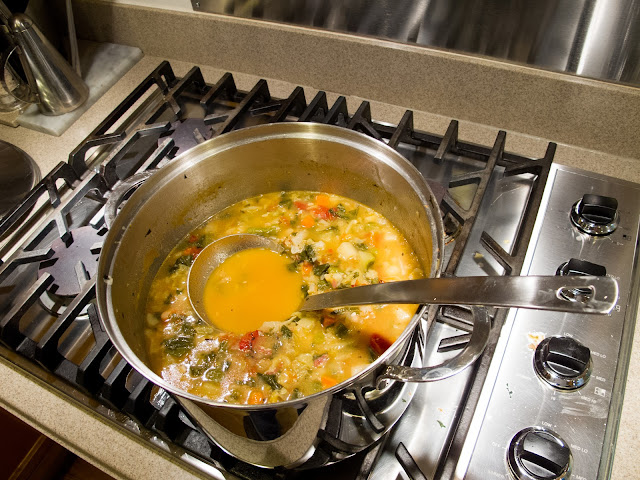 Stir and serve with a sprinkle of shredded parm on top. You will be pleased with your efforts.  If it's too thin, let it simmer a little longer.  Too thick?  Add some of the reserved chicken stock.  As an aside, this can be prepared a day or two in advance and refrigerated.  The flavors have a chance to come together and you won't be stuck doing all of this on Thanksgiving while the rest of your family is getting drunk on your beaujolais nouveau.
If you try it leave me a message and let me know how it goes!