Constant, gentle pressure...It's what he preaches, but does he practice it? 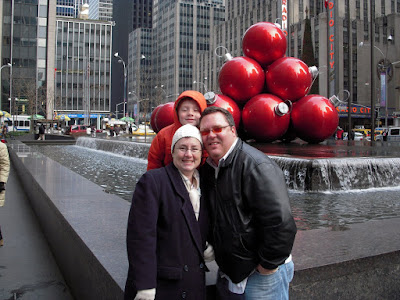 We Love NY more than eva!

Those are the words of Danny Meyers of Union Square Hospitality from his book "Setting the able." I've pulled five of his directives below:

This mantra is how he guides the staff in their day-to-day operations of the companies crazily successful restaurants, which are:
Union Square Cafe, Gramercy Tavern, Eleven Madison Park, Tabla, Blue Smoke/Jazz Standard, Shake Shack, The Modern, Cafe 2 and Terrace 5, located at the newly renovated Museum of Modern Art, and Hudson Yards Catering.
Because I wanted to see if this guy was for real, I had to give his first restaurant, Union Square Cafe, a shot.
I went on the day after Christmas with my father, wife, and son. We had spent the day traipsing around, hitting FAO Shwartz, Brooks Brothers, Bergdoff, all of the places we can't afford.
The strange thing about it is that there was no traffic, the streets weren't crowded, and we had no trouble finding parking. I used to park in Ridgewood or Hoboken and take the train, but after watching the news in the morning I decided to make a run for it in the car. We parked on the street everywhere we went. We only had to pay for a garage for lunch parking. That may not seem special to a lot of you who read my column as parking is relatively easy to find in DC comparitively speaking. 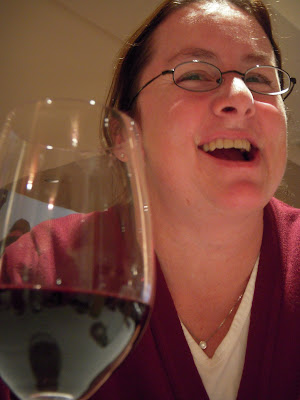 Cheryl enjoying that first glass of wine after being chilled and on her feet all day.

Anyhow, on to the restaurant. Union Square Cafe is just off....Union Square! Everyone was pleasant from the minute we walked in. We had to wait about five minutes for the table. Not a big deal.
The decor is so/so modernist. Not impressive, but not in bad shape either. Most places look better at night, and since we were there for lunch we had the full day-light effect.
We started out with some salads/soups, and a carpaccio. The carpaccio was nice and fresh, as was everything else. 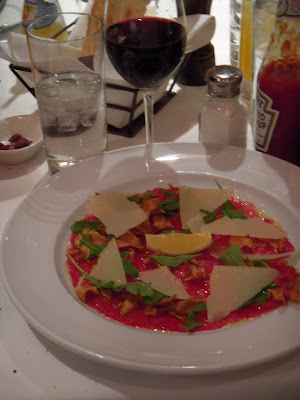 Carpaccio
For my entree, I had a 1/2 portion (nice touch on the 1/2 portions) of Linguine with Duck Liver and Bacon Ragu. This was a great item. Just enough of the liver was there to add the flavor. The presentations were great and the food was excellent. 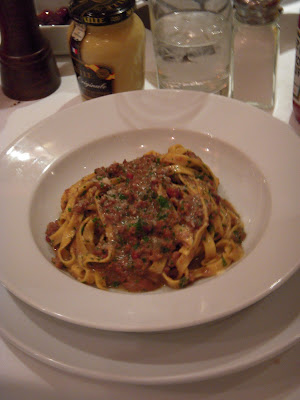 The only complaint (if you can call it that) I have about the place is in regards to our waitress. It seems that the total situational awareness that I come to expect in the really professional restaurants was lacking with our server. The rest of the staff was fine, but there was something just a hair off with her. Danny, don't scold her if you're reading this please. It wasn't unpleasant, it just wasn't pleasant. In a place like this you would think at if a server didn't "Click" with their quest that they would pass the table to someone else.
Woud I go back and try his other places? Absolutely. My wife took 1/2 her sandwich with her, which they packed very well, and put in a bag with a note from the chef that said, 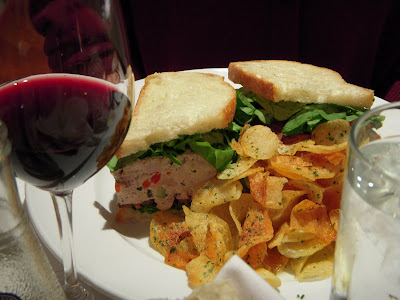 Tuna Salad with Anise and Bacon

"Thank you for dining at Union Square Cafe. I'm delighted that you thought so highly of your meal that you've taken the rest home. Hope you'll enjoy it as much the second time around. See you soon at Union Square Cafe!
Michael Romano
Chef-Owner"
That's a nice touch.
Hope to hear from you soon folks. Keep the comments coming.

Next post will be about the New Years' Eve Meal..Michael Mina Style...Tenderloin poached in herbed butter, served with truffled cognac demi-glace, truffled mac and cheese, and truffled haricot verte with Rose Chapmagne. I'm not sure what's going on with the truffles as they're usually done for the season at this point. Don't look a gift horse in the mouth I guess.

Give to those in need please.

Posted by David Smelson at 8:57 PM No comments:

Some musings on the nature of longing and renewal of faith associated with the holidays.

So I had some thoughts as I was watching the sun rise over Upper Greenwood Lake on Christmas Morning.
Going back to New Jersey for the holidays is filled with joy and a tremendous sense of relief that regardless of the time away or what has happened over the year, how people have changed, families merge and divide, friends leave, relatives grow old and new ones are born, you can always count just a few little things in life.
Taylor Ham, I love you for all of your crispy, greasy, salty goodness. May we never be apart for long.
xo 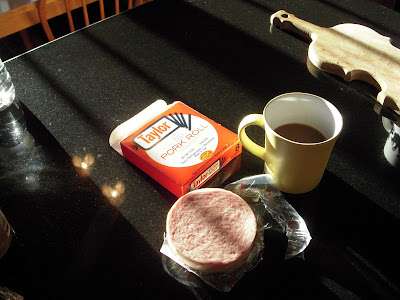 The last time I went to Grace's there were no walls, doors, furniture, floors, or anything really, other than aluminum framing and a hole in the ground. Nothing could have prepared me for what I saw when I went to have a little pre-opening tour with one of the owners, Nice Guy Eddie. He is Grace's son. 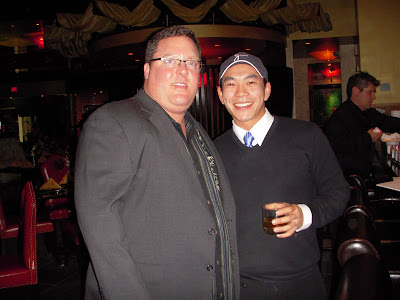 Nice Guy Eddie and me.
So, we drove down to the harbor and sampled some of his hospitality, sake, and sushi. All three were excellent. The food has got to be good when you've put in all the blood, sweat, and tears these guys have to build this restaurant. I'm predicting a very successful venture here. 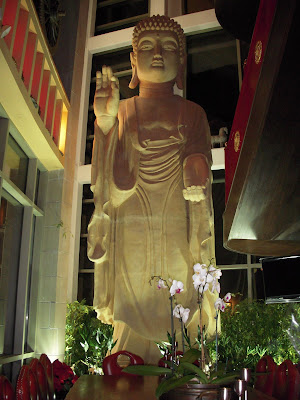 MC 30Ft. Buddha
This overlooks one of the large tables they have. There are several areas in the restaurant where you can have small, medium, or large tables with privacy. 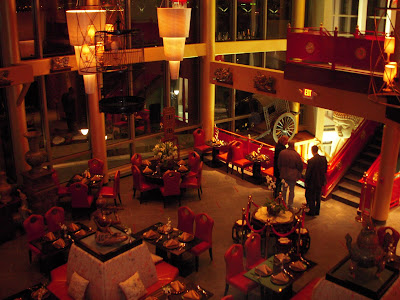 This is a view from the third floor down to the second. There are a total of four seperate floors for dining/lounging, including a rooftop patio. All have great views across the harbor. 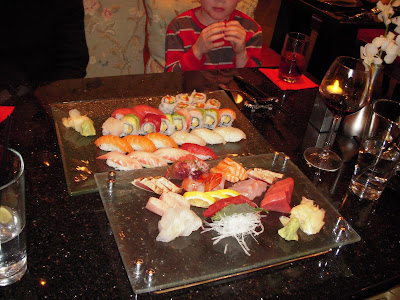 Oh, the food is good too! They weren't actually serving dinner, but since I showed up, they put together a little something for Cheryl, Alex and me. They were planning on a soft opening but didn't get all of the permits required in time to stock and prep everything until Saturday.

This place opens for business on Monday 12/22. Go down and give them a try. I think you'll like what you see. If you follow Waterfront Street until it hooks left you'll see Grace's on your left hand side.

Tell them The Doctor sent you.

Coming to you LIVE! From BLT Steak!

Sorry, had to throw in that title for obvious reasons. You run into the darndest people in Washington, don't ya? 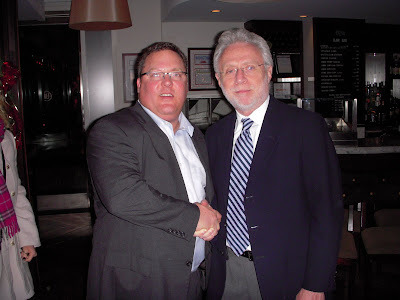 Wolf Blitzer and me at BLT Steak
So here's some news for you. I've got a favorite new steakhouse and it's name is BLT. I'd had lunch there previously, but I didn't really experience the whole thing then like I did Saturday. 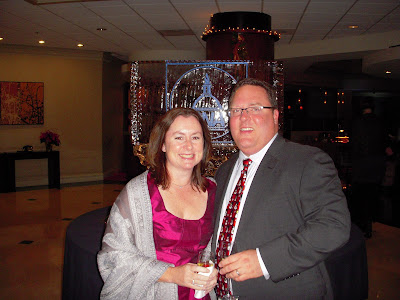 Cheryl and I started out at her office party with a few glasses of bubbly then headed to BLT for a late dinner.

Our table at BLT was a little late to open, but after eating there I understand why people want to keep their tables for a while after they're done eating. This place has the VIBE. All caps, btw. You walk in and you know you're going to have a good time because everyeone else there is having a good time. The music is cool, the place is loud, the service is there when you need it and very friendly. Adam, the GM, is very good at what he does. Their sommelier, whose name escapes me at this moment, was helpful and knew what she was talking about.
So on to the meal: We started out with a cocktail at the bar while we waited. Once we sat we got a dozen oysters. Three of the twelve weren't the best we've had, but the rest were tasty. I was starting to get concerned. All worries, however, were forgotten once the Fois Gras showed at the table. I've had my share, but this was above and beyond. Unfortunately I forgot to take a picture, and truthfully it's not pretty anyhow. That being said, this was seared perfectly. There was a crisp carmelization on both sides and it was topped with some apple something. I wasn't paying attention to the fruit really. This FG, when paired with the sauternes the sommelier suggested, was unbelievably good. Sublime is a word that comes to mind.
From there, we moved on to the entrees. Cheryl had the Sole with a browned butter, lemon and caper sauce. The browned butter brings a nutty flavor to it. It was a nice dish. The texture and flavor we as good as it gets. 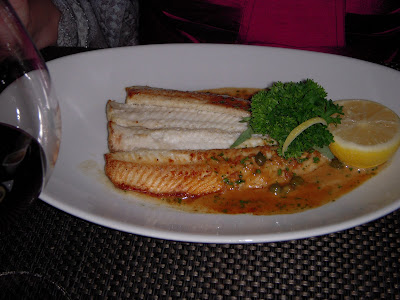 Dover Sole with Browned Butter/Lemon/Caper Sauce
On to my entree, which was a 5-ounce slab of Kobe Beef. 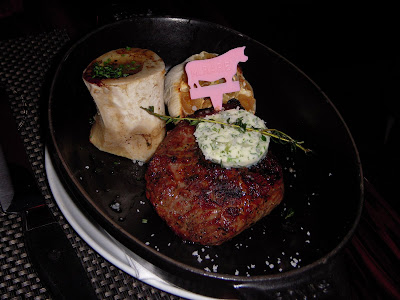 Kobe with a bone (full of marrow) and roasted garlic.
I've never had beef that tasted like this. This is the real deal flown in from Japan. The cows are fed beer and massaged daily. It tastes like it too. It was offered with a choice of sauces, though it's really not necessary with a steak like this. I got the Bernaise just to see how theirs was, and it was good, but I didn't let it near the beef. The bone was served with marrow in it. Some of that slathered on the cheese popovers they serve was a delight by itself.
The sommelier paired our entrees with a 2006 St. Joseph, Domaine du Tunnel. It stood up nicely and both Cheryl and I enjoyed it.
So, overall experience? A+. One of the top 10 meals I've ever had. I recommend it highly. Give it a shot.
Thanks for reading.
Posted by David Smelson at 6:28 PM No comments:

Are my methods.......unsound? Into the heart of darkness:

Or, into the kitchen for Thanksgiving.
What a great time. I prepped for a few days, did everything I could before-hand, et voila! It was done.
I'm going to post this in stages, so check in frequently! We'll start out with the end. The turkey. I borrowed a recipe from The Inn at Little Washington. The brine has 23 ingredients. If you're interested, post your e-mail and I'll send you the recipe. Good luck finding all of the ingredients. I was able to get 21. Mike says he only tasted 19.
Here's what the bird looked like: 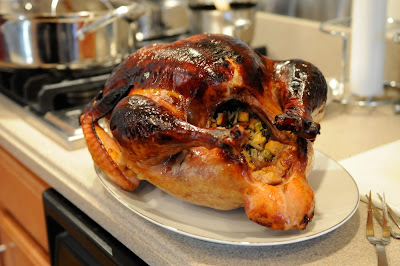 Making a little roux for the gravy. I prefer to deglaze the roasting pan with some white wine and reduce that until it's barely liquid, pour in the drippings (minus the fat) and add it to the roux with some stock. 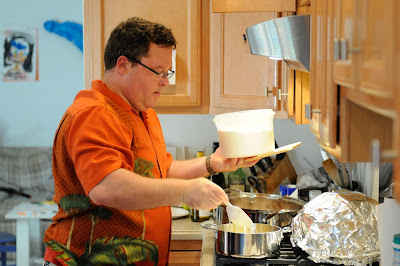 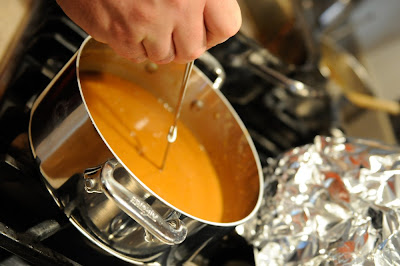 The cranberry dressing is fairly traditional with two bags of cranberries, one cup of water, 3/4 cup O.J., 1/4 cup Grande Marnier, and 2 cups of sugar. Simmer 'til it's thick and all the berries have popped (or pop them as you simmer) roughly 1/2 hour. 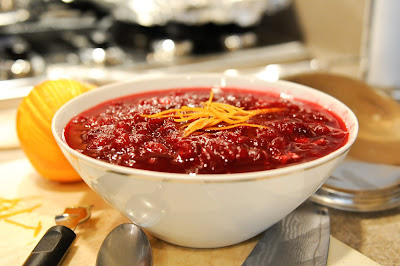