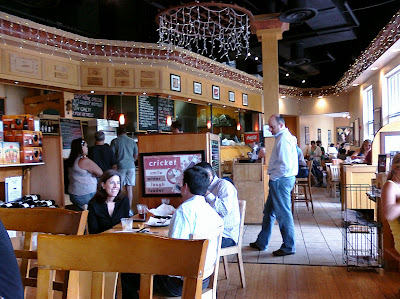 So you walk in. It's cozy. There is a good selection of wine, good food, and free WiFi. What else could you want? It's like the Starbucks of Wine. The proprietor is Walter Rhee, A veteran of some Northern Virginia restaurant groups. I've known him for eight years. 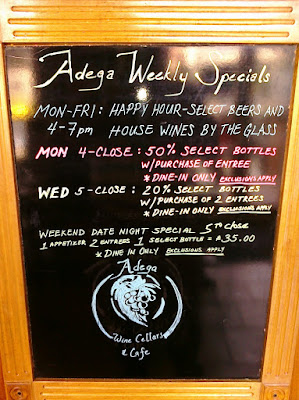 Take a look around. You'll see there are specials on various chalk and marker boards around. They've got a great selection of t-shirts too! I got my wife one that says, "Pick me, squeeze me, stomp me, Make Me Wine!" 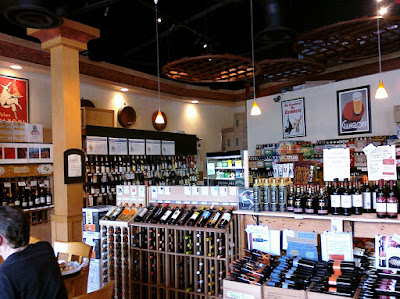 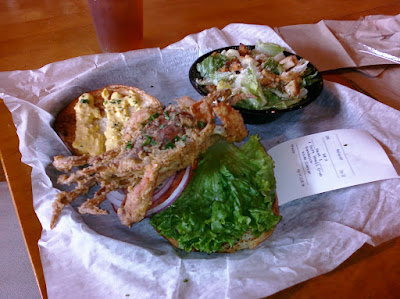 But let's not neglect the food, shall we? Last time I was in I had some calamari that was done perfectly. This dish however, the Softshell Crab, was awesome. It was literally the biggest softshell I've ever seen, and I've seen a lot. 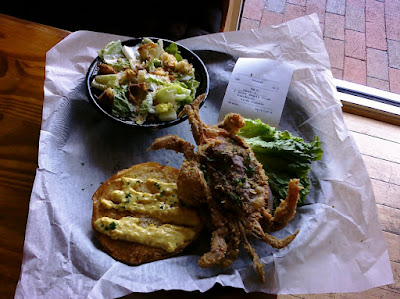 Just for perspective, the receipt in the basket is 3" wide. The seasoning was nice and the crab was done to perfection. It was served on a brioche bun with aioli. Plump, briny, and yummy.
If you get a chance, stop by and grab some lunch. If you don't have to go back to work, he's definitely got some by-the-glass specials every day.
There are also 1/2 price bottle nights and things like that.
Tell him you read about it on Pleasures of the Table!
Thanks for reading.

What's the best thing about travelling? The monuments? Not so much. The beach? It's up there in the rankings. The hospitality? It's got to be mighty fine to make an impression. My favorite? Tough guess, it's the food!
So, on to the fish tales.
We went fishing with the boys one day and came back with about 15 Spanish Mackerel. They were smallish, but had good amounts of meat. We had a ball fishing. We were on a fast boat with just the four of us and the Cap'n. When we came back to the dock I discussed favorite ways of preparing the fish with one of the guys who worked there. 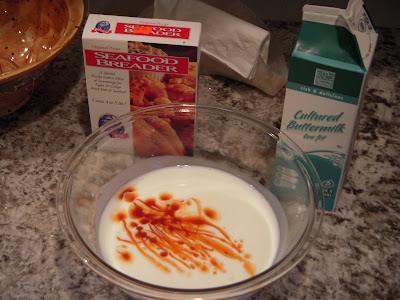 Telling me about his favorite recipe almost brought a tear to this guys' eye. He said, "Take some Texas Pete and put it in a pint of buttermilk. Add some salt and pepper. Let the filets soak in there for about ten minutes, then dredge them in fish fry. Let 'em drip for a second or two so you don't foul up your coating." 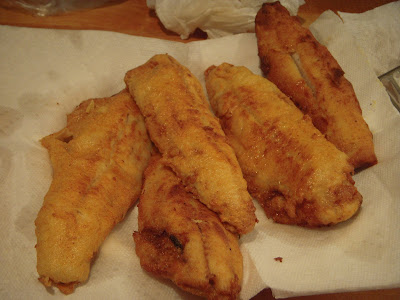 Put 2-3" of oil in a high-walled skillet and heat it until it's shimmering. Carefully put the filets in and let them cook until they're golden brown. I served them on buns with red onion, tomatoes, and some excellent spicy tartar sauce I got from Harris Teeter.
FYI, we also grilled some, but these were pretty tasty fried. 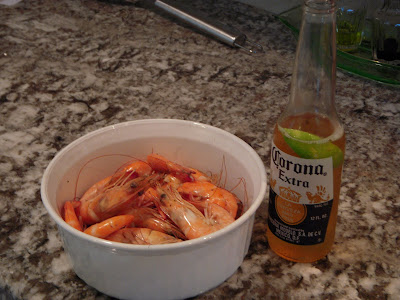 Did I mention that we started off with some head-on shrimp? Just boil those puppies on a little water and Old Bay for 3-4 minutes. Let 'em cool down enough to peel. 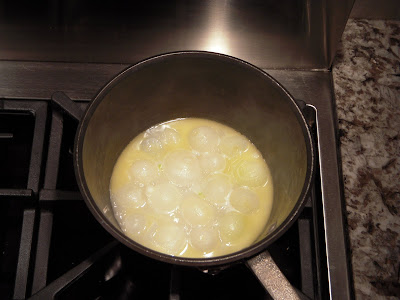 It also happened to be my wife's birthday while we were on vacation, so I whipped up one of her favorite dishes, Lobster Carnage. You've seen the video of me killing innocent lobsters, and if you look through past posts you'll see the recipe. Anthony Bourdain calls it Blanquette de Homard. Above you see the carefully peeled pearl onions cooking in some buttered water. 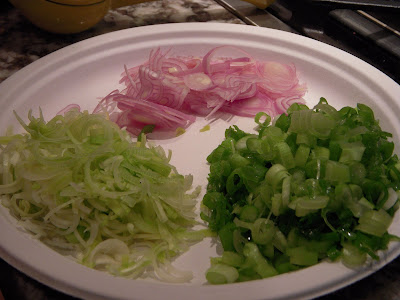 The other three types of onions that go into the dish.... 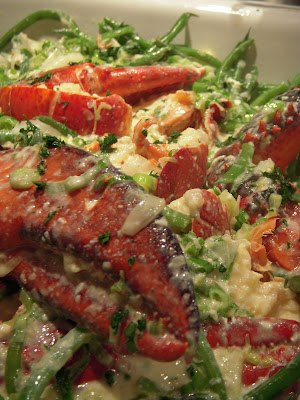 And the finished product. Awesome. 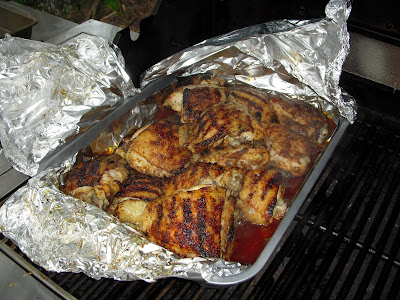 When in the south....do as the Southern folks do. BBQ some chicken. I used generous amounts of Dr. Smelly's No. 1 Rub. It makes your meat taste good. I've taken to braising the chicken. Rub it, brown it, throw it in a tightly covered or wrapped pan, add some wine, and cook over indirect heat for about an hour. Take it off the heat and let it cool in the pan, then crisp it up just before serving. The meat will be falling off the bone. 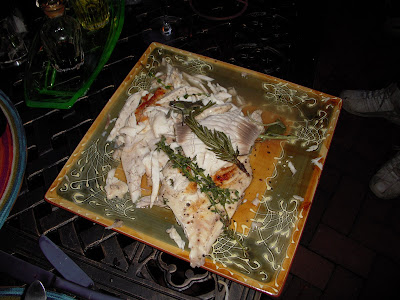 The fist night we were down my father picked up some trigger fish. Normally I wouldn't eat animals that I've kept as pets at one point or another, but these looked good. I did a little salt/pepper/sage/rosemary/thyme/white wine and wrapped them up in foil. 10 minutes on the grill and the meat was almost falling off the bone, but still firm enough to stay whole. Always fun cooking fish on the grill.
Well, thank you for reading folks. If you're interested in purchasing any of Doc Smelly's No. 1 Rub (Makes your meat taste good!) or Smelly Salts ( Malden Salt, smoked slowly and with love right here in my smoker) let me know.
I've got a bunch of restaurant stuff to post, so please stay tuned.
Posted by David Smelson at 8:34 PM No comments:

Palena without the kids...

Smiles everyone, welcome to Palena. Not quite Fantasy Island, but I be the food is better here. 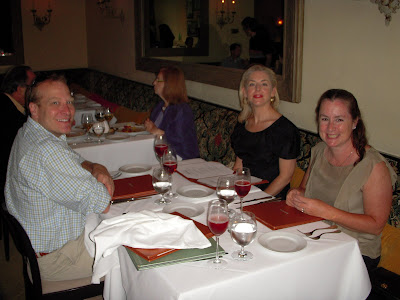 My trusty dining adventurers Andrew, Alison, and Cheryl. We decided to share a baby-sitter and leave the kids at Andrew's hacienda. BTW, the baby sitter has a degree in international finance from Syracuse. Anyone have an opening? 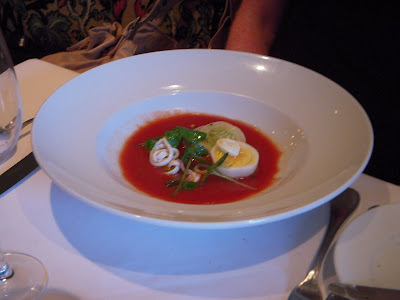 Here we have some Gazpacho. Very nice presentation. 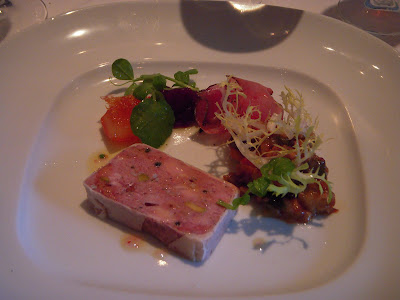 The Charcuterie plate. I ordered this if you can imagine it. The house-cured meat was good. I particularly liked the chunk of pickled citrus thing up by the greens. I'm not sure what it was, but it was very spicy/citrus-y. 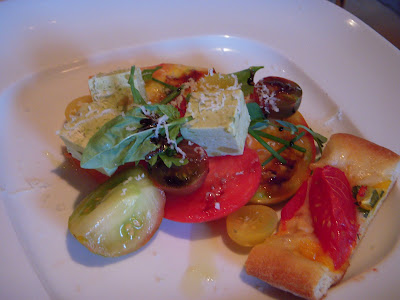 This was an heirloom tomato salad. The cubes look like some type of tofu or feta, but they were actually an avocado mousse. Maybe not a mousse. They were firmer than a mousse, but the flavors practically exploded. Neat. 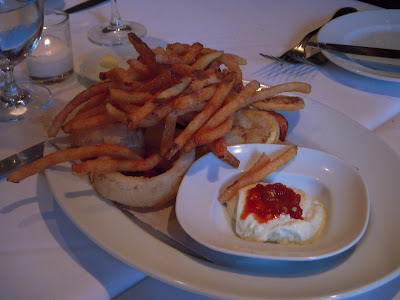 This is the fried plate that my friends have been talking about for years. Generally not served in back dining room, only in the casual cafe up front, but we've got pull. The best onion rings I've ever tasted were accompanied by fried lemons. Interesting. Very tasty. 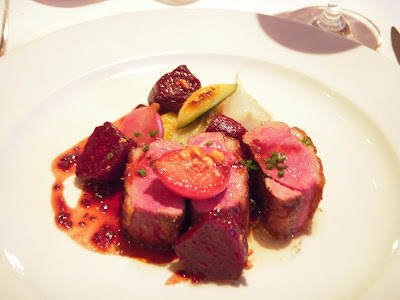 Duck breast. Parts were good, but there was some gristle. 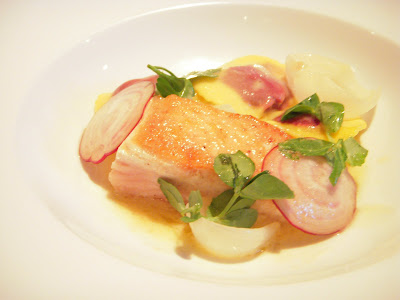 This was an awesome salmon. I'm not sure how he did it, but the crust on the top was perfect. The temperature of the fish and the consistency were as exact as I've ever had. Bravo Frank. 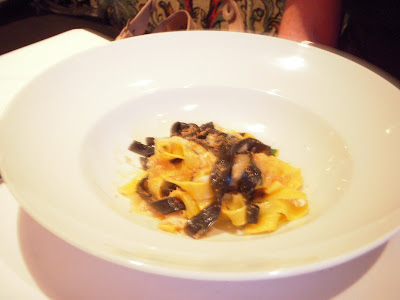 This was a squid-ink linquine de Mer. The seafood in the dish was excellent. 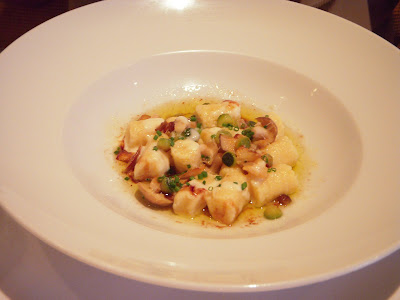 Gniocchi. It was tasty, but it's actually been a couple of weeks and I forget exactly what the sauce was about. 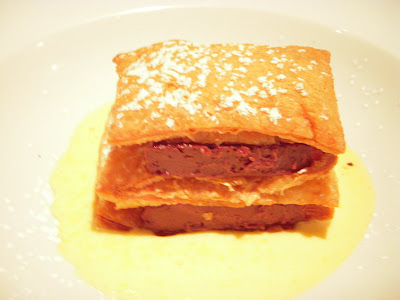 A slightly non-traditional Napoleon. Cheryl ordered this, but we ended up switching because I liked hers better and vice versa. 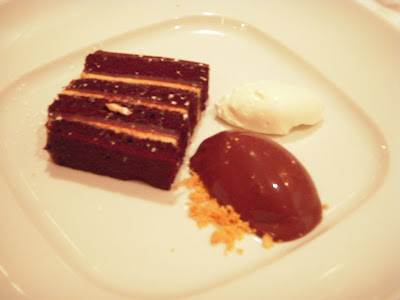 This was Andrew's chocolate affair. 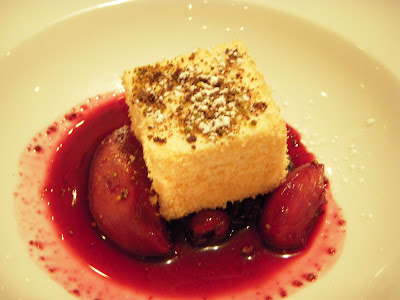 This is what I had originally, the Italian Cheese Cake made with Ricotta. It tasted exactly like I remember from home back in Belmar at Pianconne's.
So, overall? Definitely worth the trip. The wines were great. Service was attentive and always there when you needed them without being intrusive.
Keep in mind that the restaurant has two dining rooms, one is casual, the other more formal. You can get both menus in the casual portion, but generally can only order from the fine-dining menu in the other part.
You can make reservations for the fine-dining area, but need to put your name on a wait-list for the cafe. You'll often see folks waiting outside the restaurant on Connecticut Ave. for a table.
If you go, tell Kelli and Frank where you read about them.
Until next time...
Posted by David Smelson at 8:46 AM No comments: