Komi. Objectivism in the kitchen. 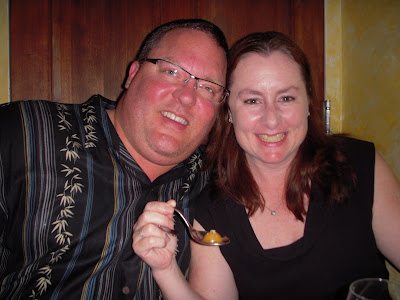 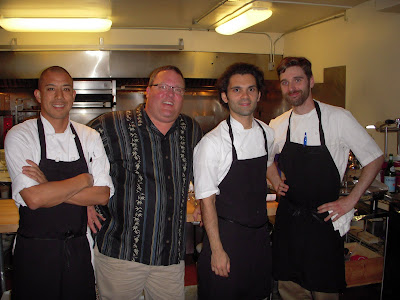 Paul, me, Johnny and John

So let me tell you a little about Komi if you are not familiar with it.

Ok, you still with me? Good. 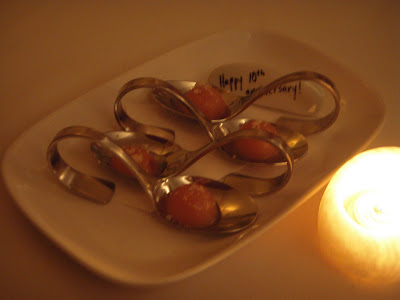 Johnny Monis is young. He's focused. I don't know him personally (yet) but from what I was able to glean he's got the mad scientist vibe going. It works for him. This is a young guy who didn't eat at a fine-dining restaurant until he was in college. He went to CIA, but left to strike out on his own before graduation.

What he took with him appears to be a very good understanding of the way meat, starch, tastes, and the various chemicals and molecules in food react to time, heat, and each other. This is molecular gastronomy, but not in the way you might be used to thinking about it. It's more about the steak than the sizzle.

The food was outstanding as you could well imagine. It starts out with a bunch of small courses, some individual, some to be shared. Sashimi, dates, pork belly, octopus, scallops, prawns as big as a baby's arm, truffles, emulsions, foams, salts, various other great tastes and textures accompanied by wines you've likely never heard of.

After the apps come the entree. I didn't mention this, but you don't order food at Komi. Johnny decides what you're eating. Anyhow, after the apps came two plates. One with a 1/4 of a suckling pig and one with a 1/4 of a roasted goat. There were warm pita quarters, hot sauce, tzatziki, eggplant spread, and, sea salt crushed with herbs served with it. This was decadence on a plate. Crunchy, rich, savory, spicy. All at once, all with great wine pairings. We were done after that, but the courses kept coming. We rolled out around 11:00pm (3 hour dinner). Stuffed, happy, and knowing that we had been in the presence of a team of people that care about what they're doing.

Is it worth it? Absolutely. Tell Johnny I sent you.

Posted by David Smelson at 10:47 AM No comments: