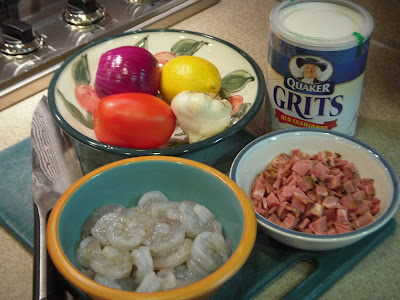 My wife got invited to an Oscar Party. The food theme is "Food Having Some Relation to The Pictures Nominated for Best Picture".
Being as lame as I am I have seen very few of the pictures mentioned above, so I had to think fast.
I saw Inception. The only food I remember from that was Ken Watanabe eating something slimy looking in the opening scene. Forgive me if my memory is unclear as to what it was.
I finally caught another last night named Winter's Bone, and the only food they ate in that was fried squirrel and venison stew. I don't think Cheryl's friends would appreciate the squirrel, and though I do like venison, I decided to go a little more main-stream.
The first thing that came to mind while perusing the list of nominees was Grits....via True Grit. It took me about 15 seconds to find one of RJ Cooper's recipes on the web from Share Our Strength. http://strength.org/recipes/sauteed_shrimp_and_grits/
A couple of things struck me about the recipe as I was working through it, so I improvised a little. Actually, enough that I can now call this recipe mine!
The first thing I noticed was that there was absolutely no pork content. How could this be?
I texted RJ and asked him about that. His response? Add Tasso.
Tasso is a spicy, dryish smoked pork tenderloin usually found in cajun dishes. The last time I'd thought about it was when I worked at Trahan's in Lexington, KY. They used tasso in the family style pasta dishes we'd share before service. Unfortunately, the chef had some bad habits that bankrupted the place, including a GM who would offer the waiters shots of Louis XIII for naughty favors....but that's a story best told elsewhere.

1. Bring grits and milk to a slow boil. Cook the grits as you would risotto, cook with the milk until just about dry, then add the cream and butter and 2 tsp salt. Simmer for 18 minutes total, stirring frequently.
2. In half of the olive oil, sauté onion until golden brown. Add salt and pepper to taste. Set aside.
3. In the remaining olive oil, sauté shrimp with a pinch of salt and pepper, then add the tasso. Add chopped garlic and beer.
4. Squeeze in the lemon juice and simmer for one minute.
5. Finish sauce with fresh thyme, (reserving some for garnish), remaining 2 Tbsp. butter and the chopped tomato.

When you plate up, put the grits in a bowl or on a plate and surround with the shrimp/tasso mixture and sauce. Put the tomatoes in the middle and sprinkle with thyme leaves.

The acid from the tomato and lemon makes this a dish that will knock your socks off.

As to my modifcations from RJ's recipe, I halved the amount of garlic, added the tasso, changed the method on the grits, and reduced the salt called for from 2 tablespoons to 2 teaspoons. Hopefully he won't hold this against me.
I am very much looking forward to him opening Rogue 24. As readers may remember, I had reservations for my birthday dinner at Table 24 in Vidalia, but had to change my reso to Proof as RJ decided to leave Vidalia a couple of weeks early. 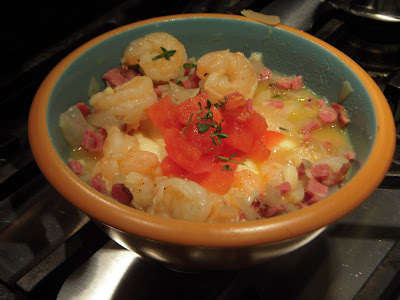 As always, thank you for reading.
Should you have any questions/comments please feel free.