Howdy folks.
I just found some interesting news. First off, El Bulli in Spain is going to become a non-profit. I'm not sure how that works in Spain, but what I get out of it is that my dream of getting back to Europe and getting a table there has just diminished greatly.
For those of you who are unaware, El Bulli is the restaurant where Jose Andres got his start in avante garde cooking/molecular gastronomy.
http://www.ausfoodnews.com.au/2010/02/23/avant-garde-restaurant-el-bulli-to-become-non-profit-foundation.html

On another note, Tony Bourdain and Eric Ripert are doing a radio show! That sounds like it would be a lot of fun. They're both very sharp guys and will be very entertaining.
http://www.luxist.com/2010/02/13/tony-bourdain-and-eric-ripert-plan-radio-show/
Thos of you who have Sirius let the rest of us know how it is please.
Thanks.
Posted by David Smelson at 7:38 AM No comments:

Black's Bar and Kitchen in Bethesda....Old Standards that Warrant a Revisit.

My buddy Mike, on the left, suggested that we go out and get some dinner last night as our children would be hanging out together at "Club Bells Mill."
It's one of those things where the kids hang out together at their school with entertainment and such and the parents get to go out for dinner. It's a fund-raiser for the PTA as well. 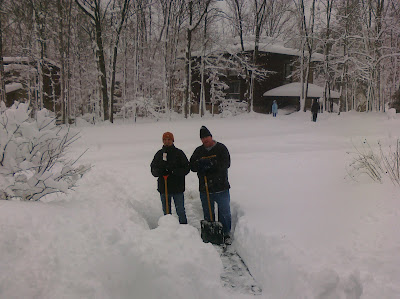 So, as it turns out, lots of parents decided it was time to go out to dinner as we'd all been working hard all week to catch up from the week of being snowed in. The place was crowded. The only way we were able to get a table was for me to call my buddy who happens to be the director of operations for all four restaurants. He told me they had been booked (all four restaurants) since Monday, but he'd see what he could do.
John came through with the best table in the house. A corner table for two (since Mike had to drop out) for Cheryl and me. It was stylin'. 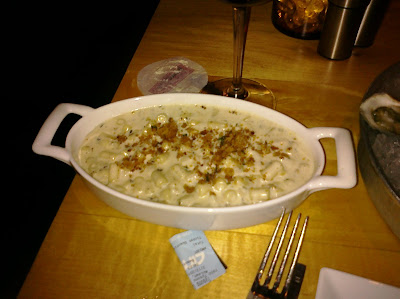 We only had two hours to get there, have dinner, and get back, so we got right to business with two glasses of a nice Pinot, a glass of sauternes for me (and my FG), Truffled Mac and Cheese, 1/2 dozen Rasberry Point oysters, and a Trout for Cheryl. She doesn't eat FG. 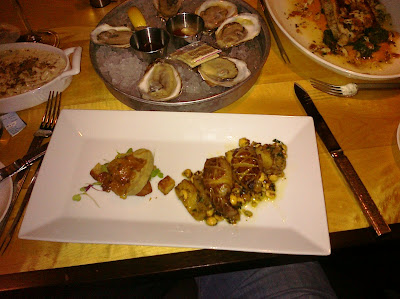 The Fois Gras.
Our waitress and I had a discussion about FG. She said she could not bring herself to eat it. For me, fois is one of the few foods that actually elicits a response that can only be likened to a sneeze response, or possibly a shiver, something like that...I'm not going to say orgasm, but it's something similar. When paired with a nice sauternes, or a good Champagne, it just does something I can't explain. 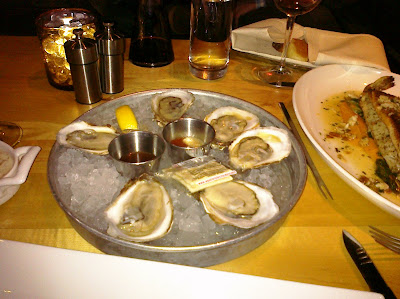 The oysters. Firm, briny. A great mignionette, though these were so nice they really didn't need it. 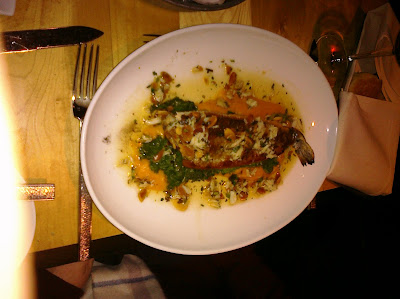 Cheryl's trout. Nicely crisped. There was a sweet potato puree on one side and some kale greens on the the other. The only thing I would recommend to Black's to improve the meal would have been to wash the greens a little better and cook them a little longer. They were still bitter and gritty.
Other than that, a spectacular meal for just over $100.00 in less than 1:30.
Check them out. If you do, let them know where you read about them.
Thanks.