Once again, I watch it so you don’t have to. Updates for 4/2/2020
News throughout the day summarized with a little salt added and capped off with the White House address.


Florida Gov deSantis finally issued a stay-at-home order yesterday. He says he did it because he saw Trump’s demeanor change. He also provided an exception to the guidance for religious gathers. Florida people, your governor is responsible for your demise, as are people who are too stupid to stay home from church. Link here: FL Gov on churches. FL Gov on Trump


Georgia Governor Brian Kemp said after announcing their stay-at-home order that he was persuaded by the change in Trump’s demeanor as well as the fact that people can transmit without showing symptoms. Who gets this guy his news? They need to be fired. Link here: GA Gov


General Robert Abrams, Commander US Forces South Korea to national leaders: “Go hard and go early. It may seem like an over-reaction. It isn’t.”


Governor Cuomo – we will get to the apex between 7 and 21 days from now. The apex will happen sooner depending on how effectively people socially distance. Findings so far are that only 20% of people who go on a ventilator survive. #staythefuckhome
It is now too late to make ventilators to address our need in New York. We’re 7-21 days out from the apex and they will not get here in time.


Someone tried to sink the USNS ship Mercy that is docked in Los Angeles with a train. I’m not making this up. Link here: Trying to sink a boat with a train.


OANN was removed from the press briefing rotation by the White House Correspondents Association for twice violating policy instituted for the safety of the WHCA pool reporters. They said they will attend as guests of the White House Press Secretary. In case you missed it, their reporter was the one being a complete asshole. Today the OAN reporter asked if Mnuchin thought their needed to be oversight. Mnuchin, of course, says no. I say absolutely we need oversight of how this 6 trillion dollars is distributed.


Trump presser – he says he will always protect your Social Security, Medicare, and Medicaid.
SBA Administrator comes on to reinforce the benefits of the Paycheck Protection Program. Within two weeks the first checks directly to taxpayers will be sent. Banks are being guaranteed 5% interest for 90 days on the SBA loans.


Mnuchin laid out how the airline assistance program is going to work.
SBA administrator – we’re concerned about every small business. There are 30 million of them.
Mnuchin – independent contractors and sole proprietors are covered. That part of the program will be up and running next week.


Trump – can’t pull the word COVID-19 together when he’s reading it. Spells it out for everyone. Says it’s a word we’re going to be hearing a lot and we won’t forget. Mentions that this is something the fed was never expecting, but they’re doing it. Said that the fed acted early and quickly. Reminds the democrats in Congress that this is not the time for partisan investigations and witch-hunts. You saw what happened last time. They lost, and all it does is increase my poll numbers.


Pence – came out and spoke coherently talking about what they’re actually doing to help.


Kushner – said FEMA has provided a month’s supply of N95 masks to the NY hospital system based on their current burn rate.


Rear Admiral Polowczyk states that after examining the entire supply chain he’s discovered some, “Irregularities in the supply chain.”


Navarro states that the irregularities are due to a thriving black market in PPE. It’s being shipped overseas. He says that’s going to stop now.


Trump – gets on stage again and continues to say all of the states should have had all of this equipment. We’ve been doing a great job. He denigrates a state for not buying a stockpile of ventilators three years ago. He says big hospitals get by with 3 ventilators, now they want thousands.
On opening up the enrollment for ACA – we’re doing better than that. We’re trying to get a cash payment as just opening up ACA doesn’t help. Pence comes out to clarify that it’s cash payments to hospitals to cover the uninsured costs related to COVID-19.


Birx – She can tell by the curve that Americans are not following the social distancing guidelines. #staythefuckhome


Trump again blames NY for getting off to a late start, praises himself for cutting off China and Europe early.


Japan is banning Americans from coming in. Trump goes into how he was banning before banning was fashionable.


Trump sent the letter below to Senator Charles Schumer today. This is not normal. 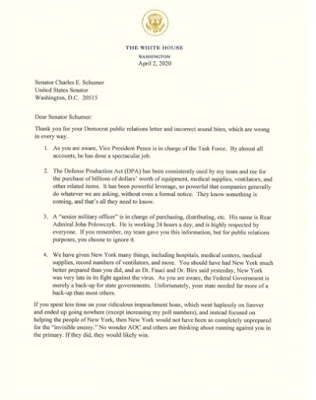 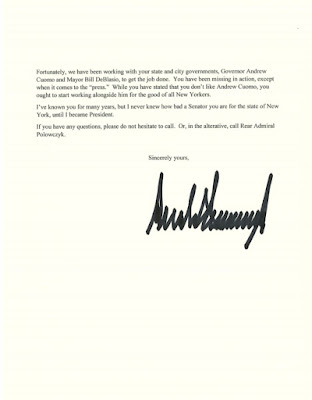 Closing numbers for 4/2/2020 – Cases – 242,182 Deaths – 5,850
Once again, thank you for reading. Do not take anything written here as gospel and certainly don’t make any financial decisions based from the information provided. Stay as tuned-in as you can. Support your local businesses as much as you can. Lastly, #staythefuckhome

Posted by David Smelson at 7:51 PM