Cuomo Presser
Trump tweet below – Note, the Nobel Prize has nothing to do with literature/journalism and it’s spelled Nobel. This kind of shores up the estimations of his lack of knowledge that most people get in grammar school. 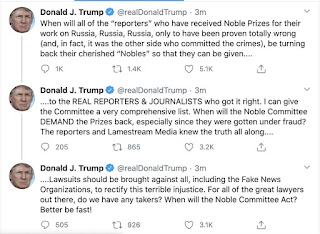 
That’s about all I could take. Thanks for reading.

Once again, thank you for reading. Do not take anything written here as gospel and certainly don’t make any financial decisions based from the information provided. Stay as tuned-in as you can. Support your local businesses as much as you can. Lastly, #staythefuckhome – but if you don’t #nottooprettytomaskup
Posted by David Smelson at 6:51 PM