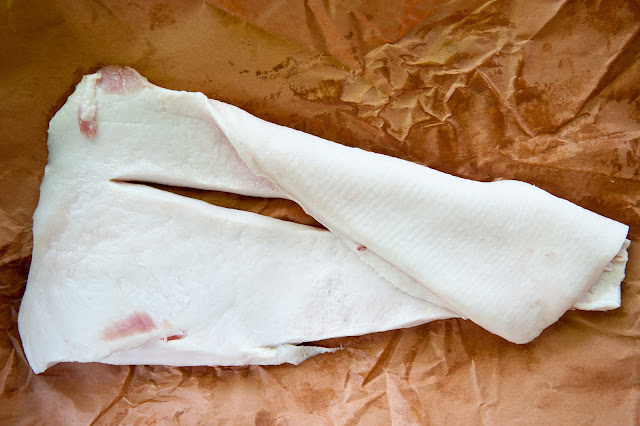 Why shouldn't I make my own lard?  Who wants all those chemicals in the store-bought stuff?  So, I went to an old-fashioned butcher shop where they actually cut the meat. i.e. they don't have black styrofoam packages.
Boarmans Meat Market13402 Clarksville Pike
Highland, MD , 20777
(301) 854-2883 View Map - Get Directions 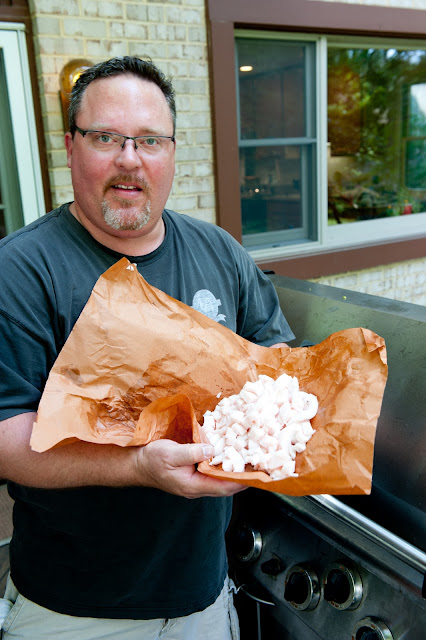 I cubed the pork fat...should have thought ahead and had them grind it at the butcher store.  Notice I'm doing this in a crockpot outside.  It's a stinky affair.  Add a cup of water to 3 or so pounds of fat.  The water is to prevent scorching and will evaporate.  It took about 2 hours total at 350. 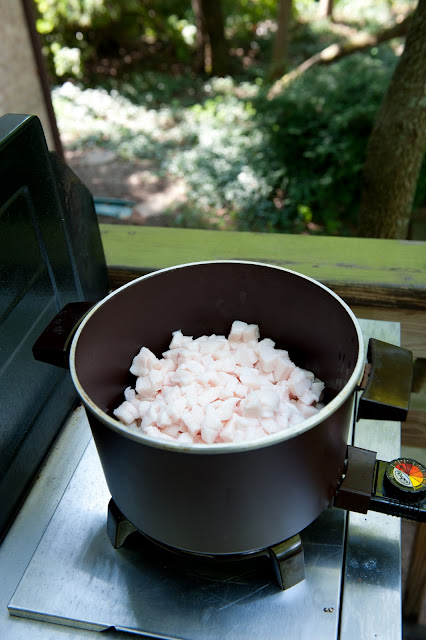 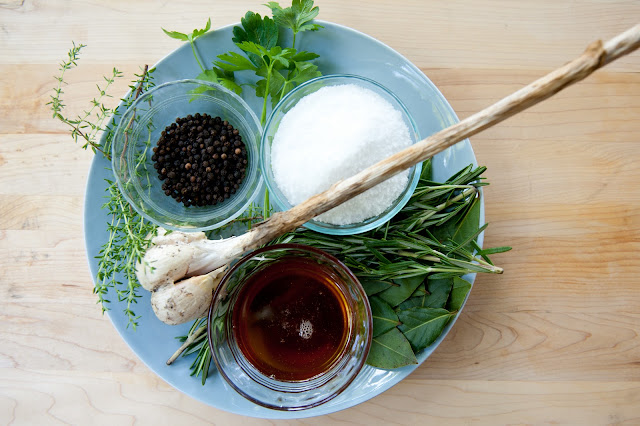 This is the brine.  Thyme, garlic, parsley, rosemary, bay, salt, sugar, peppercorns, and honey.  The lovely garlic was a gift from my friend Hilda Staples' garden.  Hope she reads this and saves me some next year!  This is one of my favorite pictures of the product. 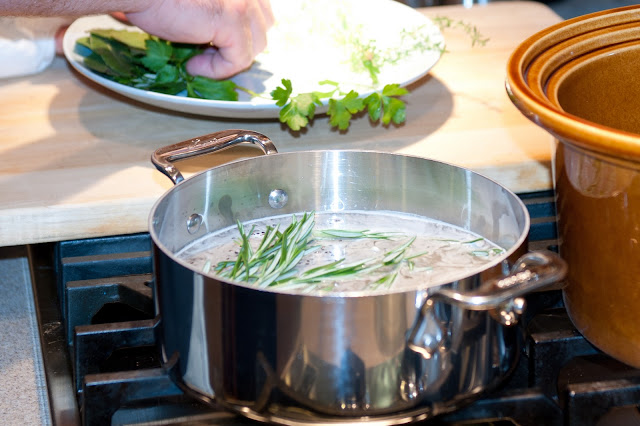 When you're making the brine you have to keep the salt/water measurements exact.  You don't want too much salt or it will toughen the walls of the cells in the meat, leading to tough meat.  I let that brine overnight. 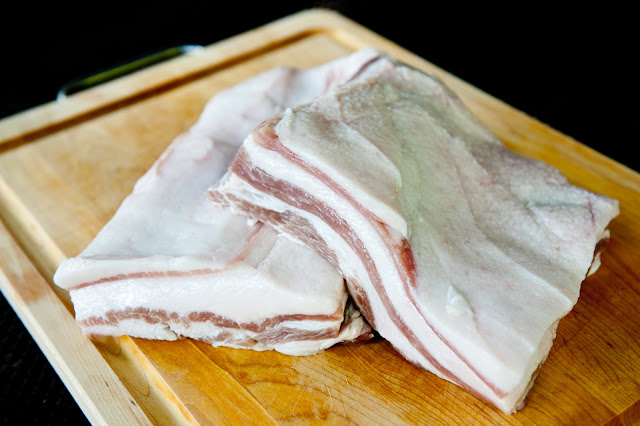 This is about 4 pounds of Polyface Farms pork belly. 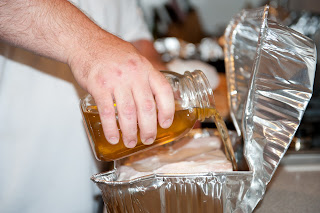 I pulled the meat from the brine, dried it, and let it come to room temp.  I then cooked it at 200 for six hours covered with the lard I'd made the day before.
Once it was done and cooled, I stored it in the lard in the fridge overnight. 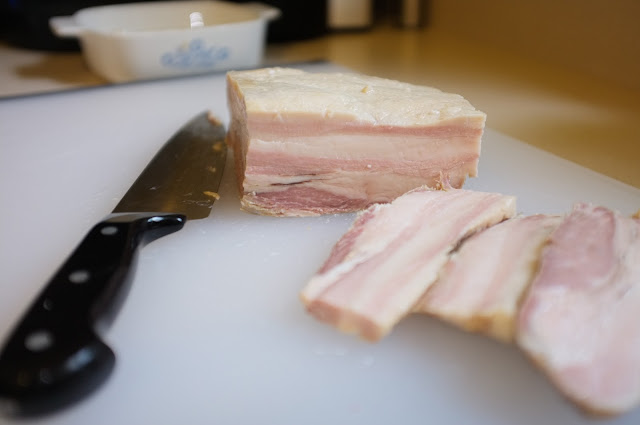 The next day I sliced it up, some into strips, and some into cubes so I could try to approximate the pictures in the cookbook. 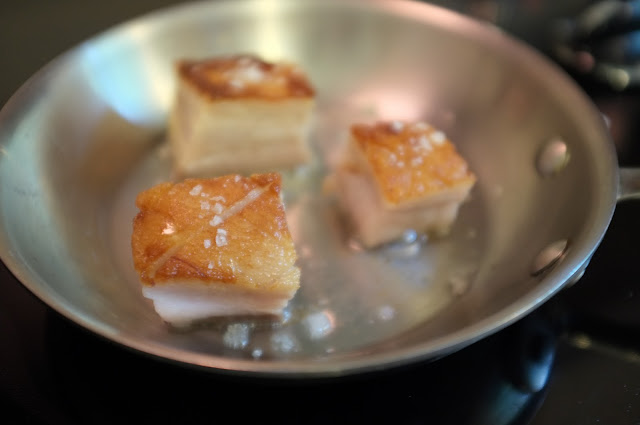 These shots of the finished product were taken by my friend Mike.  He's the one who suggested the project.  I think he just likes pork belly! 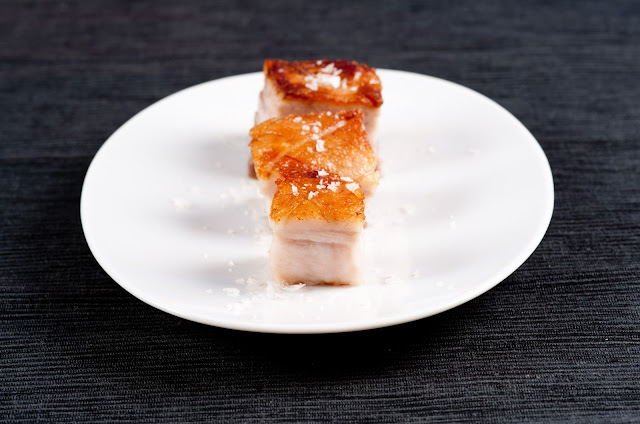 Thanks for reading.  Please contact me with any questions, comments, or rude remarks.﻿
Posted by David Smelson at 2:00 PM